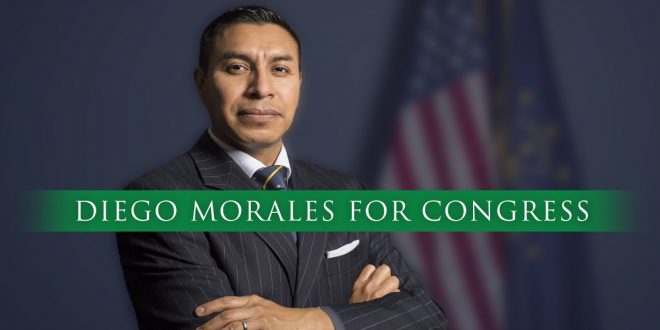 Sorenson graduated from the University of Saint Francis in Fort Wayne with a Bachelor of Arts degree in Political Science and Legal Studies. He has worked for Senators Randy Head, David Long, Jeff Raatz, and John Ruckelshaus. He also served the Senate Majority Campaign Committee as Statewide Field Director and Project Manager.

“I’m dedicated to helping Diego win his race to be Indiana’s 4th District Congressman because I know he’s the best man for the position,” says Sorenson. “His service to our state and our country, his extensive experience in the public and private sectors, and his honesty, integrity and true adherence to conservative principles will represent his constituents well in the coming years.”

Congressional Candidate Diego Morales is a U.S. Army veteran and has been recognized for his service to his community and his country by being named a Sagamore of the Wabash. He currently serves as Chief Business Development Officer for The Sodrel Holding Company, Inc., and is an Adjunct Professor at Ivy Tech Community College.

I play on the radio from 7 am -1 pm weekdays on 98.9 FM WYRZ and WYRZ.org. Follow me on twitter @WYRZBrianScott or e-mail me at brian@wyrz.org.
Previous Congress introduces bill to overturn rule, protecting Hoosiers from payday lending
Next Hoosiers Feeding the Hungry is funded in part by a grant from Whitetails Unlimited