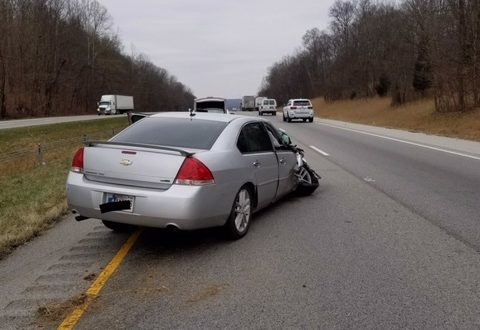 Putnam County—Just before 10:00 this morning, Indiana State Police responded to a one-vehicle crash in the westbound lanes of Interstate 70 near the 34 mile marker.

Preliminary investigation revealed a westbound silver 2013 Chevrolet Impala, driven by 52-year-old Robin Blansett of Farmersburg, IN., left the roadway and struck the center median barrier cables. After striking the cables, the Impala reentered the roadway and struck a westbound 2003 Kenworth tractor pulling a semi-trailer and driven by 58-year-old Daniel Foster of Joplin, Missouri.

Robin Blansett was transported to St. Vincent Clay Hospital in Brazil for treatment of a medical episode. She was belted and was the recipient of airbag deployment, thus receiving no injuries from the crash.

Daniel Foster was not injured nor cited.

INDOT workers in the area had notified ISP about the silver Impala operating erratically. Commercial Vehicle Enforcement Trooper Yan Dravigne was in the area and attempting to locate the vehicle. A few minutes later, and before Dravigne could locate the Impala, ISP Region V Dispatch Center was notified of the crash.

I play on the radio from 7 am -1 pm weekdays on 98.9 FM WYRZ and WYRZ.org. Follow me on twitter @WYRZBrianScott or e-mail me at brian@wyrz.org.
Previous Donnelly Pushes Again For Reauthorization of the Children’s Health Insurance Program
Next Banks and Bipartisan Group Seek Funding for A-10 Wings

Department of Agriculture warns of harvest traffic on rural roads