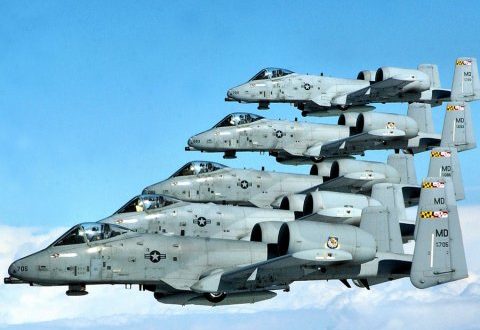 Banks and Bipartisan Group Seek Funding for A-10 Wings

The fiscal year 2018 (FY18) National Defense Authorization Act, recently signed in to law by President Trump, fully-authorized the Air Force’s request to restart A-10 wing production. This initiative was funded in the House’s FY18 defense appropriations bill but not in the Senate version of the legislation. The letter sent today by Congressman Banks and 19 other members asks the Senate to fund production.

The letter can be found here and the full text is below: December 15, 2017

We write to express our grave concern regarding the Senate Appropriations Defense Subcommittee’s omission of a $103 million Air Force unfunded requirement to restart A-10C Thunderbolt II wing production in its fiscal year 2018 (FY18) funding bill. The A-10C is currently one of the most utilized aircraft across multiple theaters, and this requirement was specifically included in FY18 House and Senate National Defense Authorization Acts (NDAAs), the FY18 NDAA conference report, and the House-passed defense appropriations bill. This funding must be secured in any final FY18 spending package in order to prevent a critical capability gap in the operational fleet.

As you may know, the Air Force has taken the A-10C out of “sunset status” (after “mothballing” the equivalent of five squadrons, leaving only nine deployable squadrons in the inventory) in the face of growing security threats and increased operational tempo in the Middle East, Southeast Asia, and the Korean Peninsula. The A-10 “Warthog” has continued to be instrumental in U.S. contingency operations around the globe, including just south of the demilitarized zone (DMZ) for critical anti-armor capabilities against North Korea, deploying to Eastern Europe and the Baltics in the face of Russian aggression, conducting missions in the South China Sea in the face of illegal Chinese military expansion in the region, and fighting the Islamic State (ISIS). In fact, as of August 30th of this year, the Warthog had dropped roughly 20 percent of all munitions—more than any other aircraft—in the fight against ISIS, and had flown 14 percent of all sorties deployed since counter-ISIS operations began in 2014.

Furthermore, the A-10 is uniquely designed for life-saving missions like Close Air Support (CAS) and Combat Search and Rescue (CSAR). The former protects troops in harm’s way while the latter involves rescuing downed pilots or other isolated personnel from enemy territory before they become prisoners of war. A-10 pilots specifically specialize in these missions because only the A-10 has the lethality, loiter time, and survivability to succeed in each of these mission sets.

Congress has taken clear and concrete steps to preserve the remaining A-10C fleet over the last several years. In FY16, Congress: fully funded the fleet, prohibited the use of any funds to retire any additional A-10s; required the Air Force to maintain a minimum of 171 combat-coded A-10s; and directed the Air Force to commission an independent assessment of the required capabilities and mission platform to replace the A-10.

The FY17 NDAA and defense appropriations bill continued this trend by: preserving the current fleet of 283 A-10s; again requiring a minimum of 171 combat-coded A-10s; mandating adequate maintainers and a regular depot schedule; protecting A-10s in the boneyard from premature destruction; and asking for a plan in conjunction with the FY18 budget request to prevent any A-10s from becoming unflyable due to wing deterioration.  Congress also required the Air Force to conduct a comparison or “fly-off” between the F-35A and the A-10C in CAS, CSAR, and Forward Air Control-Airborne (FAC-A) missions and prevented any retirements until the full operational test and evaluation (OT&E) for the F-35A is complete and an analysis is done by the Air Force on missions gaps. This exercise has yet to occur.

The FY18 NDAA also established a requirement for the Air Force to maintain no less than 1,970 fighter aircraft. The A-10 is a vital part of maintaining this force.

However, 110 A-10C aircraft—one-third of the fleet—are in desperate need of wing set replacements in order to safely continue mission assignments into the coming years. 173 A-10s have already received new wings. But, as the Air Force was considering whether to decommission the A-10 fleet, the contract for wing production was allowed expire before the remaining 110 wing sets could be completed. In September, Gen. Ellen Pawlikowski, commander of Air Force Materiel Command, said the Air Force would be forced to start grounding some A-10s beginning in 2018 because their wings will have reached the end of their service life. Yet, in October, Gen. Pawlikowski also confirmed that the Air Force has “re-geared up” the A-10 depot line in order to sustain the A-10 fleet “indefinitely.”

Now that the Air Force has confirmed that it plans to maintain the A-10 fleet well into the foreseeable future, the remaining 110 wing sets must be delivered as soon as possible. The A-10remains the only aircraft in the U.S. military specifically designed for CAS and CSAR. If one-third of the A-10 fleet were to be grounded, it would create a significant capability gap at a time when our servicemembers are facing increasing threat environments. This $103 million would allow the revival of a wing production line and begin the process of supplying these 110 aircraft with the new wings they need to keep flying safely in the future until we have a proven, tested replacement for its capabilities.

Congress has clearly willed over recent fiscal years that the A-10C fleet be sustained in its entirety. Further, this wing funding was a top Air Force Unfunded Priority List item specifically added into both the House and Senate FY18 defense authorization bills, the FY18 NDAA conference report (which will soon be signed into law by President Trump), and the FY18 House defense appropriations bill, which passed the House in July. As such, we urge you to include this funding in any final spending package for FY18 in order to keep these battle-tested aircraft in the air and in the fight.

I play on the radio from 7 am -1 pm weekdays on 98.9 FM WYRZ and WYRZ.org. Follow me on twitter @WYRZBrianScott or e-mail me at brian@wyrz.org.
Previous Medical Episode Causes Driver to Crash in Putnam County
Next Lt. Governor Crouch speaks to Brownsburg Rotary Club