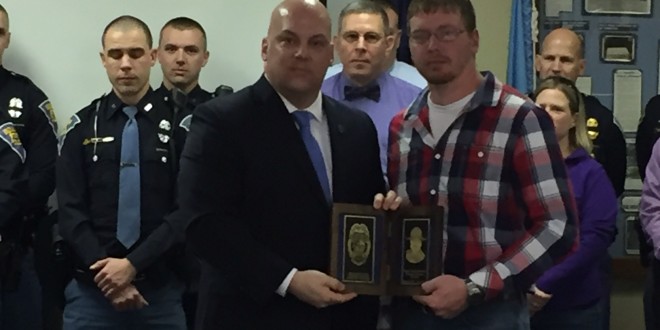 This was believed to be the first time a family member received the retirement recognition usually given to the trooper at the end of their career. Blake was honored with the presentation of his father’s duty weapon and his retirement identification. “These are two of the most recognized articles a trooper will be honored to possess after they leave the department. I hope Blake cherishes them as much as his father would have.” stated Superintendent Carter.

Lieutenant David Kirkham of the Indiana State Police Alliance presented Blake with the retiree lithograph and an Alliance bronze plaque.

Present at the ceremony with Blake were Tom’s brothers, one of whom is retired Master Trooper Detective Mike Minnicus from the Pendleton Post, Tom’s sister Ann, Tom’s mother Teresa and troopers and detectives from the Lafayette post.

I play on the radio from 7 am -1 pm weekdays on 98.9 FM WYRZ and WYRZ.org. Follow me on twitter @WYRZBrianScott or e-mail me at brian@wyrz.org.
Previous S.R. 37 Most Reasonable Route for I-69 from Martinsville to Indy
Next Governor Pence: Kokomo Sheriff’s Deputy Carl Koontz’ ‘legacy will live on forever’