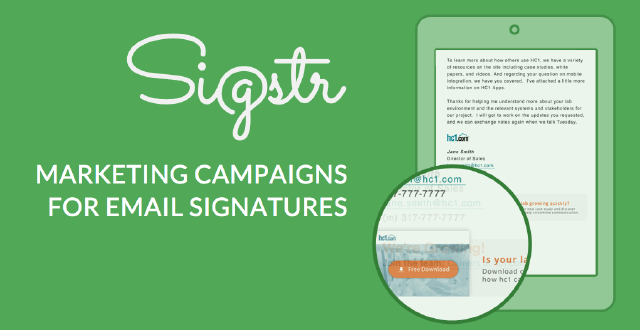 INDIANAPOLIS (June 23, 2016) – Sigstr, an email signature marketing platform, announced plans today to expand its operations in Indiana, investing $1.4 million to double its downtown footprint and creating up to 111 new jobs by 2020.

“Sigstr’s news that it is choosing Indianapolis to grow its tech platform and add more than 100 new jobs is the latest in a long line of great announcements from our state’s rapidly growing tech community,” said Governor Mike Pence. “With the hard work of companies like Sigstr, Salesforce and Determine – which is moving its headquarters here from Silicon Valley, Indiana is adding new technology jobs faster than the national average. Here in Indiana, entrepreneurs and innovators benefit from low costs, low taxes, reduced regulations and a highly-skilled workforce, making the Hoosier state the best place to start and grow a business.”

The company, which allows businesses to market via employee emails, has doubled its revenue in the first quarter of this year and has more than doubled its customer base since December, growing from 90 to now 185 customers. To accommodate growing demand, the tech firm will double its office space on the 10th floor of the Circle Tower Building on Monument Circle in downtown Indianapolis. The company has outgrown its current offices on Monument Circle and will expand to add another 4,000-square-foot space connected to its current office.

Sigstr is a portfolio company of High Alpha, an Indianapolis-based venture studio managed by former ExactTarget CEO Scott Dorsey. The company serves national and global clients including Indiana-based Angie’s List and Delta Faucet, Georgia-based SalesLoft, New York-based ReturnPath and Arrow Electronics and Switzerland-based Roche. Sigstr is led by Dan Hanrahan, a veteran of the marketing tech industry with experience in leadership roles at iGoDigital and ExactTarget.

“The decision to scale our business in Indianapolis is a huge part of our competitive advantage,” said Hanrahan, founder and chief executive officer of Sigstr. “I personally came up through iGoDigital and ExactTarget with amazing mentors and connections to some of the brightest, most accomplished people in marketing tech. As a growing tech company we had many location options; however, scaling quickly, you need access to capital, customers and talent, which we were able to successfully find right here in in Indy.”

Founded in 2015, Sigstr has hired 20 Hoosiers within the last year, including three this month. The company is currently hiring for account management, marketing and software engineering jobs, and plans to add 59 positions by the end of 2018. Positions are expected to pay average wages more than 25 percent above the state average. Interested applicants may apply online at www.sigstr.com/company.

With Sigstr’s technology, companies have the power to consistently brand their employees’ email signatures and to unlock a new marketing channel via employee email. Because employees on average send 10,000 employees each year to clients, suppliers and other important business contacts, Sigstr’s platform for managing email signatures allows companies to promote their most important initiatives and to maintain a consistent, professional brand from each employee email.

The Indiana Economic Development Corporation offered Sigstr Inc. up to $1,000,000 in conditional tax credits based on the company’s job creation plans. These incentives are performance-based, meaning until Hoosiers are hired, the company is not eligible to claim incentives. The city of Indianapolis supports the project in partnership with Develop Indy, a business unit of the Indy Chamber.

“We commend the rapid growth of Sigstr over the last year and are excited to welcome this expansion in the heart of our city,” said Angela Smith Jones, deputy mayor for economic development for the city of Indianapolis. “Supporting the tech ecosystem is vital to the continued growth of the Indianapolis economy and further diversification of our workforce.”

Indiana’s technology sector added jobs at a rate of 18 percent from 2012 to 2014, which is three times faster than the national average. Sigstr’s growth follows announcements within the last year from technology companies including Salesforce, Determine, Emarsys, Blue Horseshoe Solutions, Lumavate, PolicyStat, iLAB, Appirio, GyanSys, Rook Security and Eleven Fifty Consulting, which together are committing to create thousands of tech jobs in Central Indiana. According to TechPoint, technology jobs in Indiana pay an average salary of upwards of $75,000 a year.

I play on the radio from 7 am -1 pm weekdays on 98.9 FM WYRZ and WYRZ.org. Follow me on twitter @WYRZBrianScott or e-mail me at brian@wyrz.org.
Previous Donnelly Hosts Defense Secretary Carter for Historic Visit to NSA Crane
Next Group Fundraising Opportunities Available at the Indiana State Fair