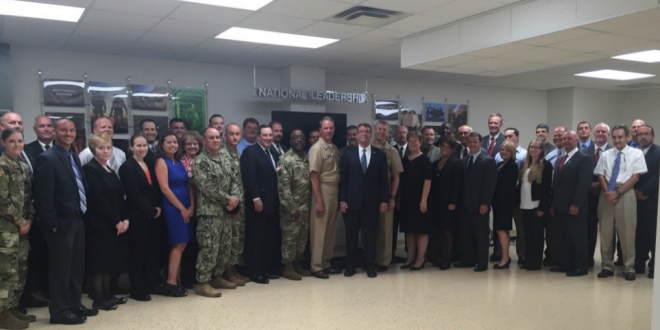 Donnelly said, “It was a great honor to host Secretary Ash Carter at Crane for today’s historic visit – the first ever by a Secretary of Defense at Crane. Crane is one of our nation’s most important military laboratories – with thousands of Hoosiers working behind the scenes to keep our nation safe and help our troops return home safely. While Crane has been referred to as one of the Pentagon’s best-kept secrets we’re trying to change that, and I am pleased Secretary Carter could see the base firsthand. ” 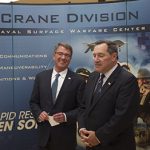 Secretary Carter during a media availability at Crane said in part, “I want to thank Senator Donnelly for knowing the importance of this place [Crane] and making the suggestion to me that we come here together to learn about what’s going there, to make sure that I am up to date on the fantastic work being done here, to thank the fantastic group of staff here, and also the community for supporting this installation…They do things that range from our nuclear deterrent…to supporting today’s warfighter, who are protecting us and our people and our country right now…to high-tech and incredibly important areas for our future like electronic warfare…Crane has a bright future.”

Captain JT Elder, Commanding Officer of NSWC Crane said, “What a great day for Team Crane! This historic visit provided Secretary Carter a firsthand look at a sampling of the many ways in which NSWC Crane’s technical expertise is providing national leadership in innovative solutions that keep our nation’s warfighters safe. Senator Donnelly’s leadership was instrumental in making this visit happen. We value his continual efforts to advocate for Crane, both in Washington, DC and Indiana.”

NSA Crane is the third-largest U.S. Navy installation in the world and is home to numerous research laboratories, testing facilities, and cutting-edge technology development center. This year marks Crane’s 75th anniversary. NSA Crane has an annual business base of approximately $2 billion. With nearly 3,700 civilian employees and 1,700 contractors, NSA Crane is one of Indiana’s largest employers.

I play on the radio from 7 am -1 pm weekdays on 98.9 FM WYRZ and WYRZ.org. Follow me on twitter @WYRZBrianScott or e-mail me at brian@wyrz.org.
Previous Governor Pence Joins INDOT and State and Local Officials to Kick Off Construction on $92 Million in I-69 Improvements
Next Marketing Tech Platform Commits to Indianapolis for Growth