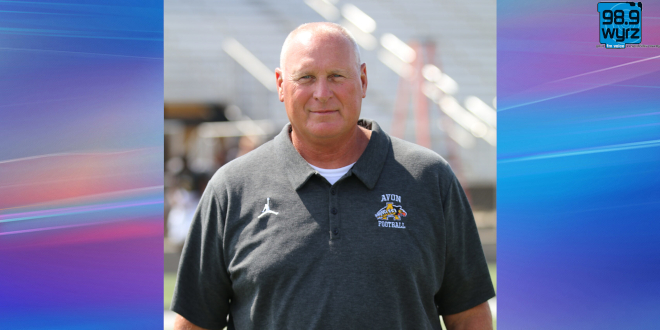 Avon, Ind. – Avon High School (AHS) Varsity Football Head Coach Mark Bless has announced that he is retiring from coaching. He hangs up his whistle after 13 years at AHS and 38 years overall. Bless’ teams won more than 66% of the games he coached. He accumulated a 92-56 record at AHS and a 241-123 record overall.

Beyond the wins and losses, Bless’ greatest success is leading the AHS program with integrity. “Mark Bless exemplifies the pillars of Avon Football – Tradition. Passion. Honor.” said AHS Principal Matt Shockley. “Mark built a respected football tradition based upon student athletes’ love for the game and each other. Mark is a man of integrity, and he expected his players and staff to conduct themselves in a manner that honored themselves, their families, the program, and our school.”

Bless graduated from Greenwood High School, where he was a state champion wrestler, a standout track and field athlete, and, of course, an accomplished football player. Bless’ college football honors included a Heartland Conference Player of the Year Award and Division II All-American recognition at the University of Indianapolis (UIndy). He is a 1984 grad and a member of the UIndy Athletics Hall of Fame. His head coaching career included tenures at North Vermillion High School (1990-1994) and Mooresville High School (1995-2009) before he began leading the Avon Orioles. His teams have won numerous conference and sectional championships.

“For the last 14 years, Coach Bless has been a fixture on the AHS Athletics landscape,” said AHS Athletic Director Joshua Larsh. “His accomplishments will be appreciated and remembered for years to come, and his presence will be missed. We thank him for his years of dedication and efforts on behalf of student athletes. We wish him all the best.”

“My son played for Coach Bless,” noted Shockley. “I am proud and grateful that he – and many other players – had the privilege to be part of his program. He and his wife Nancy, herself a fierce supporter of Avon Football, will be missed.”

I play on the radio from 7 am -1 pm weekdays on 98.9 FM WYRZ and WYRZ.org. Follow me on twitter @WYRZBrianScott or e-mail me at brian@wyrz.org.
Previous IMPD Detectives and the FBI Violent Crimes Task Force Make Arrest in Serial Bank Robbery Case
Next Gov. Holcomb announces $22B in 2022 in Capital Commitments