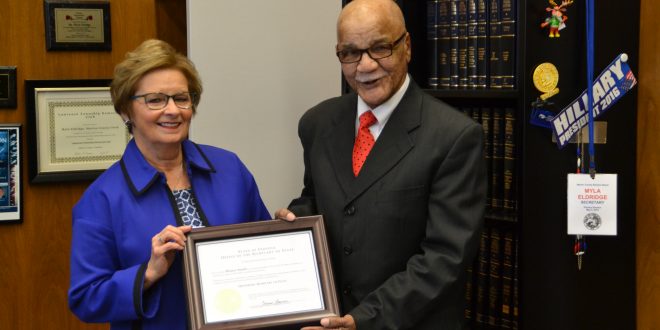 INDIANAPOLIS (Nov. 21, 2017) — Indiana Secretary of State Connie Lawson presented longtime Marion County poll worker Homer Smith with an Honorary Secretary of State today.  Smith was a finalist for the 2016 Victor Risch Poll Worker of the Year Award.  Smith has served as an Election Day official in Marion County and Pike Township for over 20 years.

Secretary Lawson had high praise for Smith. “Mr. Smith has exceptionally served his community and ensured our voting process runs effectively and efficiently. As an inspector for not just one, but two precincts, he processed a total of 1488 voters, proving just how valuable he is to our community. Additionally, he has contributed to successful elections for over 20 years by efficiently operating polling sites and donating his time and efforts. Like Victor Risch, Homer Smith is an asset to our community and country, which is why I chose to recognize him today.”

The Victor Risch Poll Worker of the Year is awarded to a Hoosier poll volunteer who has demonstrated exemplary service and made significant contributions to local elections.  The award was developed and named in honor of Victor Risch, a long-time Marion County poll worker who was killed in 2015 as he made his way to the polling station on Election Day.  The award is a tribute to Victor for his years of service to the community.

Elections are the cornerstone of our democracy and would not run without volunteer poll workers.  Each year thousands of Hoosiers from across the state volunteer take part in the process.  Clerks from around the state nominate outstanding poll workers from their community and the awardee is selected from those nominations.  All finalists are made Honorary Secretaries of State. Marion County Clerk Myla Eldridge nominated Homer Smith.

I play on the radio from 7 am -1 pm weekdays on 98.9 FM WYRZ and WYRZ.org. Follow me on twitter @WYRZBrianScott or e-mail me at brian@wyrz.org.
Previous IMPD Homicide detectives make an arrest in double homicide
Next Applications Are Now Open for 2018 Brownsburg Resident Academy