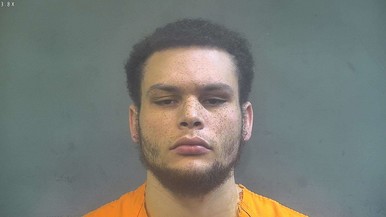 Lebanon, IN – An Indianapolis man was arrested last night, March 28, 2021, after he allegedly fired a pellet gun at a vehicle on I-65 in Boone County. At 10:30 p.m. a vehicle stopped on the side of I-65 in a construction zone near Lebanon, where a trooper was sitting stationary, and alerted the trooper that his vehicle had just been shot. The victim provided the suspect’s vehicle description and the trooper subsequently caught up to the vehicle on I-65 southbound about three miles away.

The driver of the suspected vehicle was identified as 19 year old Joshua Chabal of Indianapolis. The investigation into the incident led to the arrest of Chabal on the preliminary charges of Criminal Recklessness and Reckless Driving. Troopers determined Chabel allegedly shot a pellet gun (commonly referred to as a BB gun) from his moving vehicle at another moving vehicle, causing the driver’s side window on the victim’s vehicle to shatter. Chabel was taken into custody and transported to the Boone County Jail. The victim’s vehicle was occupied by an adult male driver, adult female passenger and two children in the back seat, fortunately there were no injuries reported.

The preliminary charges listed above are merely probable cause for arrest, actual charges will be determined by the Boone County Prosecutor’s Office. All crimes listed in this release are alleged and persons named are presumed innocent until and unless proven guilty in the court of law.

I play on the radio from 7 am -1 pm weekdays on 98.9 FM WYRZ and WYRZ.org. Follow me on twitter @WYRZBrianScott or e-mail me at brian@wyrz.org.
Previous Kevin Robinson (KROB)
Next INDOT Enters Agreement with the Town of Plainfield and Hendricks County for Relinquishment of SR 267