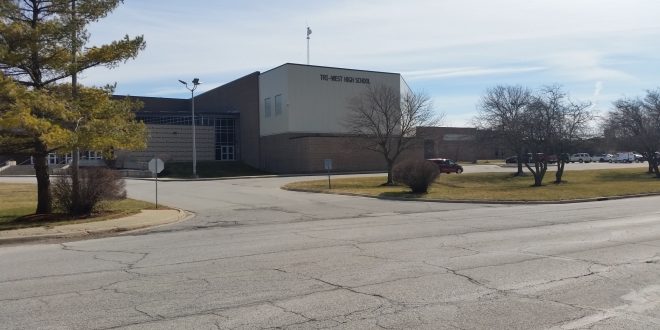 Lizton — Some of the students at Tri-West High School here in Hendricks County walked out of the school in protest, according to news channel RTV6 because of the firing of an attendance secretary at the school.

David Pyatt is the former attendance secretary, who talked with RTV6 about what he says was the failure of the school to protect students from a teacher who is charged with child seduction.

The student walkout was planned for 10:25 a.m. Thursday. RTV6 reports that students claim there were teachers blocking exits in an effort to stop the walk out but once they were outside they were not allowed back in the school.

Reportedly a communications consultant paid by the district told RTV6 that “Students need to be in school and can return. All absences are considered unexcused.”

At least one Tri-West area business says he supported what the students did on Thursday. Robert Ecker is the owner of Rusted Silo in Lizton. He showed his support by offering a BBQ sandwich for any students that may have missed lunch due to the protest and posting it on Facebook.

Ecker explained why and how he decided to show his support to the students saying, “Well, being in this community and witnessing what’s gone on over the last, almost, year, where nothing is getting resolved, we decided to support David Pyatt because he put his job on the line, his livelihood, to help secure our kids and keep them safe in this school that doesn’t seem to be wanting to do that… there may be some of them that didn’t get to eat today because they may have depended on school lunches, so we wanted to put that offer out there…So, we decided to take a stand and put out there that we support the community, we support the kids, and we support David Pyatt.“

When asked about the response from the Facebook post, Ecker said, “Yeah, there are people that disagree with my stance, and that’s their opinion, just as I have mine; that’s what makes this country great, because we all have our opinions and we can share them. I dealt with a couple calls today where parents were like, “We’ll never be back” and I’m like, “I appreciate your stance and that’s your option.” But clearly there are more people supporting the community than not, and that’s a risk we’re willing to take to support our kids.“

I play on the radio from 7 am -1 pm weekdays on 98.9 FM WYRZ and WYRZ.org. Follow me on twitter @WYRZBrianScott or e-mail me at brian@wyrz.org.
Previous Indiana State Police Investigating Officer Involved Shooting in Terre Haute
Next Detectives recover illegally possessed guns related to violence on Indy’s southeast side