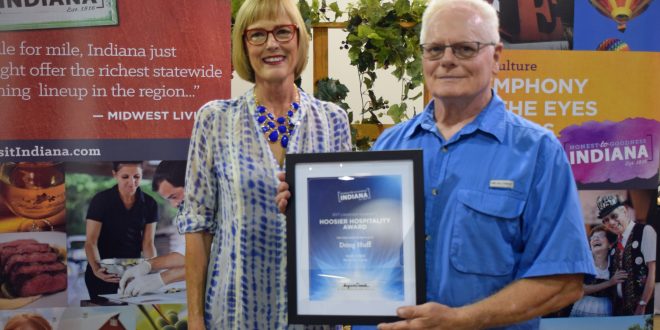 DANVILLE, IN (August 22, 2017)- A Hendricks County resident who became
one of the driving forces behind the preservation, restoration and
re-opening of the Oasis Diner received statewide recognition for his
service to Indiana tourism last week.

Doug Huff, owner of the Oasis Diner in Plainfield, was one of 19
recipients of the 2017 Lieutenant Governor’s Hoosier Hospitality Awards
during an afternoon ceremony on Aug. 18 at the Indiana State
Fairgrounds.

Lt. Gov. Suzanne Crouch presented Don Rector, Huff’s business partner
and father-in-law, with the award. Huff could not attend the ceremony
due to businesses obligations.

After a long history in Hendricks County that dated back to its arrival
in 1954, the Oasis Diner closed in 2008 and appeared to be on the fast
track to becoming a memory as it was listed by Indiana Landmarks as one
of its ten most endangered Indiana buildings.

Huff, who has a construction background, became interested in partnering
with the town of Plainfield to renovate and re-open the diner in the
town center. Despite not having a background in the restaurant business,
he began researching restaurant operations, and after three years of
work that included spearheading the diner’s move and renovation, he
became the general manager and co-owner of a landmark that has become a
visitor destination for the town and Hendricks County since it reopened
in 2014.

Through Huff’s leadership the Oasis Diner has become a member of the
Indiana Foodways Alliance, Rural Routes to Main Street Cultural Trail
and the Indiana National Road Association.

Nominations for Hoosier Hospitality Awards are submitted by community
members and destination patrons. Nominations are reviewed and winners
are selected by the Indiana Office of Tourism Development.