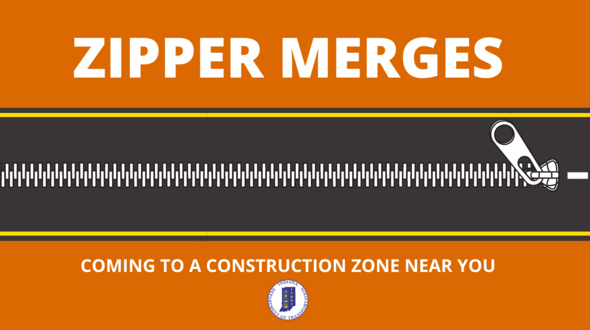 INDIANA — The Indiana Department of Transportation will be transitioning from merging early to merging late with more widespread use of zipper merges in work zones this construction season.

What is a zipper merge?

Zipper merges are used when a lane is closed ahead due to road construction or maintenance work. Zipper merges are designed to keep traffic moving by allowing drivers to use both lanes until reaching the merge point.

How does a zipper merge work?

Zipper merges work exactly as they sound – like a zipper!

As drivers see “lane closed ahead” signs, they should stay in their current lane up to the designated merge point. Then drivers should take turns moving into the open lane. This practice is much safer than merging early, which causes congestion and more significant changes in speed.

When a zipper merge is in place, be respectful of other drivers who wait to merge until just before the lane ends – they’re doing it right!

Most drivers tend to merge at the first sight of a “lane closed ahead” sign, however many slow too quickly, which can lead to unexpected lane switches, serious crashes and road rage.

Zipper merges provide several benefits to the traveling public. Risks decrease when motorists use both lanes until reaching the defined merge area and then alternate or take turns moving to the open lane in a zipper-like fashion.

What are the benefits of a zipper merge?

When should zipper merges not be used?

In situations where traffic is flowing at highway speeds with no or minimal back-ups, drivers should merge early to the open lane. Not all work zones are conducive to use of a zipper merge. Signage will be present if a zipper merge is present, and motorists should continue to merge when it is safe to do so.

I play on the radio from 7 am -1 pm weekdays on 98.9 FM WYRZ and WYRZ.org. Follow me on twitter @WYRZBrianScott or e-mail me at brian@wyrz.org.
Previous Construction scheduled to begin March 15 on I-65 Added Travel Lanes project in Boone County
Next IMPD Homicide Detectives Make Arrest in December Homicide Investigation