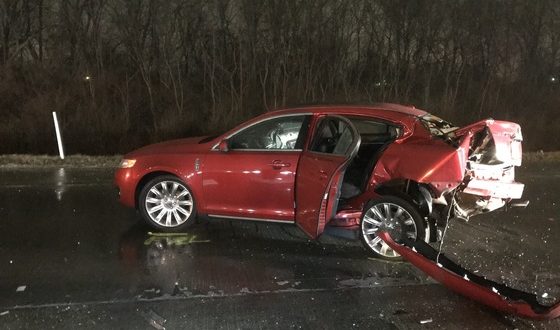 Indianapolis, IN – Two people are dead after being struck by an alleged drunk driver along I-70 just west of Holt Road. A state trooper discovered the wreckage just before 4 o’clock this morning.

Preliminary investigation determined a passenger car was stopped on the side of I-70 near the 76.4 mile marker and both occupants were standing outside the car. A black Ford F-150 drove onto the emergency shoulder and struck the rear of the car also striking both people. One of the people struck was thrown into the center lane of I-70. Shortly after the crash, and before any 911 calls were received, Trooper Ty Mays was driving through the area and noticed a vehicle in front of him make an evasive maneuver to the left. Mays then spotted the wreckage along the right side of the road and activated his emergency lights. As he slowed to stop for the crash he struck the body of the victim in the center lane.

The passenger in the Lincoln was identified as 26 year old Edwin Jackson of Atlanta Georgia. Jackson played linebacker with the Colts and had first joined the team in 2015.

Both occupants were pronounced deceased at the scene by the Marion County Coroner’s Office.

The driver of the pick-up truck, who identified himself as 37 year old Alex Cabrera Gonsales of Indianapolis, fled the scene on foot. He was apprehended shortly after on the ramp to Holt Road by Trooper Mays. It is believed Gonsales was intoxicated and was driving without a license. He was transported to the Marion County Jail, the result of the test for intoxication is pending.

I play on the radio from 7 am -1 pm weekdays on 98.9 FM WYRZ and WYRZ.org. Follow me on twitter @WYRZBrianScott or e-mail me at brian@wyrz.org.
Previous Donnelly Praises Continuation of HIP 2.0 as Opportunity to Increase Substance Abuse Treatment Services
Next Hit and Run Semi Driver Arrested in Vigo County