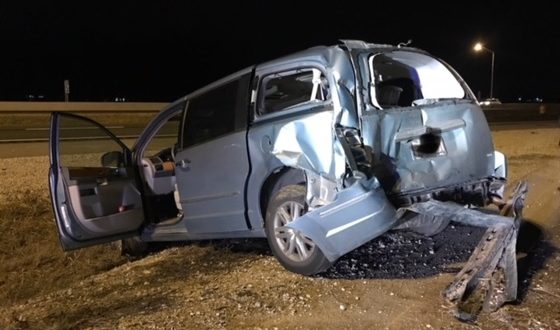 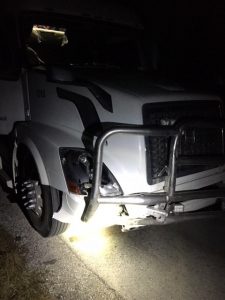 Preliminary investigation revealed a white 2016 Volvo tractor pulling a semi-trailer, driven by 28-year-old Harjot Singh of Alberta, Canada, was following a 2008 Chrysler van, driven by 18-year-old Gabriella Waltz of Paris, IL. As the van slowed near the exit, the tractor-trailer struck the van in the rear and continued on without stopping, along eastbound I-70.

An off-duty out of state police officer continued to follow the semi after the crash and report the suspect’s location via 911. Minutes later, near the 35 mile marker eastbound I-70 in Putnam County, Troopers Courtland Woodruff, David Cox Jr. and Austin Fowler, located and stopped the suspect tractor-trailer. Harjot Singh was taken into custody for Leaving the Scene of a Personal Injury Crash and incarcerated in the Vigo County Jail.

Gabriella Waltz was transported to Terre Haute Union Hospital for treatment of head, neck, and internal injuries and hospitalized. Ms. Waltz tested positive for controlled substances and charges are pending. She was transported by Terre Haute Fire EMS.

Two passengers in the Waltz vehicle, a 21-year-old and a 16-year-old, were not injured nor cited.

The crash and DUI investigation is being done by ISP Trooper Brad Fyfe. Trooper Courtland Woodruff handled the arrest of Singh. Singh was driving for Blue Ocean Freight of Ontario, Canada.

I play on the radio from 7 am -1 pm weekdays on 98.9 FM WYRZ and WYRZ.org. Follow me on twitter @WYRZBrianScott or e-mail me at brian@wyrz.org.
Previous Indianapolis Colts Player Among Two People Struck and Killed Along I-70 by a Suspected Drunk Driver
Next Traffic Stop Leads to Passenger Arrested for Numerous Drug Violations in Vermillion County