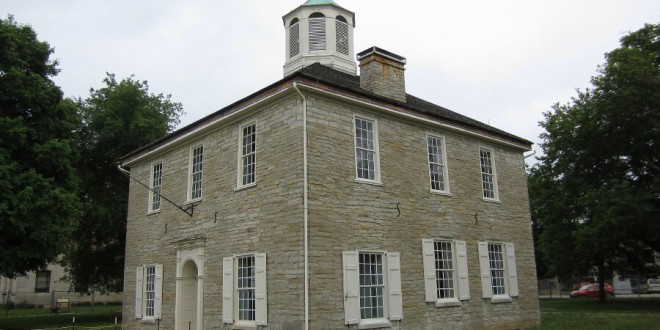 The Indiana Supreme Court held its first oral argument in Corydon on May 5, 1817, in the case of McDowell v. Davis. The three judge panel met in a small room (about 500 square feet) in the upstairs of the capitol building. The Senate met in another room upstairs and the House of Representatives met downstairs in the same building.

The Indiana Department of Education is supporting the event and encouraging classrooms across the state to participate through an archived webcast of the argument which is expected to be available April 22. Attorneys and judges are invited to visit a school in their community as part of the celebration to talk about the judicial branch. Educators and speakers will have access to case briefs and other resources at courts.in.gov/corydon that provide teaching points for speaking to students.

The Indiana State Bar Association, in coordination with the local bars of Clark, Crawford, Floyd, Harrison, and Scott counties, is supporting the event. They are encouraging attorneys and judges to speak to students about the judicial branch including oral argument procedure and the daily operations of the courts.

The Court holds about 70 oral arguments at the State House in Indianapolis each year. Occasionally, it schedules arguments outside the capitol to allow students, press, and public in other areas of the state an opportunity to see the work of the Court.

I play on the radio from 7 am -1 pm weekdays on 98.9 FM WYRZ and WYRZ.org. Follow me on twitter @WYRZBrianScott or e-mail me at brian@wyrz.org.
Previous Marijuana Grow Operation Found at Rosedale Home
Next Fiery Semi Crash on I-65 claims One Life