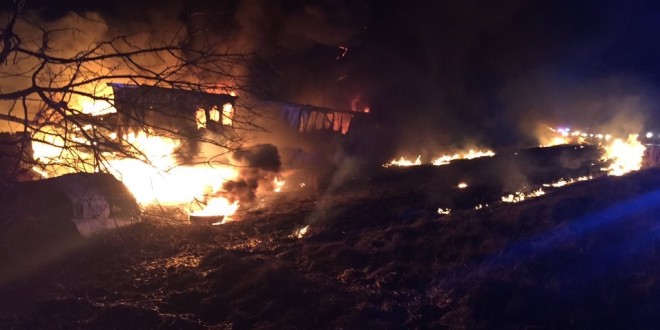 Fiery Semi Crash on I-65 claims One Life

Johnson County – Around 6:13 this morning emergency crews responded to reports of a semi crash and large fire on I-65 southbound at the 93 mile marker. The first trooper on the scene reported a Good Samaritan had pulled the driver out of the fiery wreckage. Firefighters and paramedics quickly arrived on scene and began treating the victim. The driver was transported to the hospital where he died at 7:14 a.m. 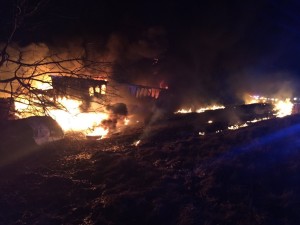 Although the driver ultimately died, the heroic and noble actions of one man offered a chance of survival. The Good Samaritan, 56 year old Bryan Corns of Crown Point Indiana, said “I saw the crash and just couldn’t drive by without stopping to help.” He later said, “when I got to the cab of the truck the trailer was blazing, it was burning me, but I knew I had to get him out.” Corns got the liquid all over him from whatever was in the trailer, was nearly burnt, was inhaling smoke, and still managed to pull the driver from the wreckage. Bryan Corns bravely put his life on the line for a complete stranger to save the driver from a horrific death inside that burning semi.

Initial investigation indicates the semi ran off the road for unknown reasons, struck a guardrail, then went approximately 50 feet off the road and struck a tree before catching fire. The fire quickly spread to the grass and trees in the area before being contained by firefighters. The southbound lanes of I-65 were closed for about 90 minutes. The wreckage will be cleaned up later today after rush hour due to necessary lane closure for the equipment. The semi was hauling liquid protein in large plastic containers, there were no hazardous materials on board. 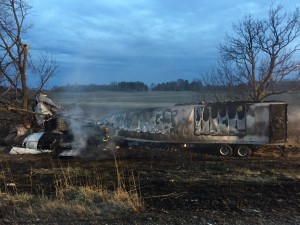 As of now, all southbound lanes are open at the 93 mile marker, however traffic is very slow in both directions due to emergency equipment on the shoulder. It is expected at least one southbound lane will be closed later this morning and throughout much of the day for clean up.

I play on the radio from 7 am -1 pm weekdays on 98.9 FM WYRZ and WYRZ.org. Follow me on twitter @WYRZBrianScott or e-mail me at brian@wyrz.org.
Previous Indiana Supreme Court to celebrate bicentennial in Corydon with oral argument in original courtroom
Next Speed and Inattention Causes Early Morning Crash in Sullivan County