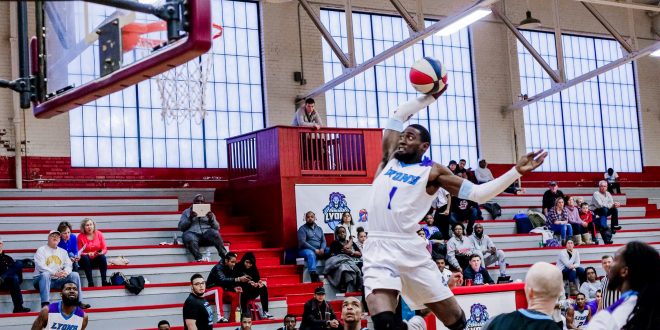 DANVILLE, IN – Hendricks County’s own professional basketball team, the Indiana Lyons, wrap up their 2019-20 home schedule on Saturday, Feb. 29, at 5 p.m. against the Louisville Diesel. The game will be played at Bosstick Gym, located within Danville Town Hall at 49 N. Wayne Street in Danville. Doors open at 4 p.m.

The Indiana Lyons (19-3) are nearing the end of their second season, and it has been a successful one on the court. The team is ranked #3 in the American Basketball Association (ABA) out of more than 150 teams with three games left to play before the ABA playoffs.

Owned by Avon businessman Tyrone Brown and his wife, Deborah, the Lyons are a family-friendly organization that are heavily involved in the community. Players interact with fans before and after games, and every contest ends with a group photo of players and fans at center court.

In the Lyons’ inaugural 2018-19 season, the team won its first-ever game, finished with a 14-9 record, and qualified for the ABA playoffs. A home loss in the first round of the playoffs left a sour taste in their mouths, so they’ve cranked up their intensity and level of play this year.

Lyons players come from all over the country and have a wide variety of college and international basketball experience. Team co-captain Mike Pugh is from Mississippi, center Jermaine Harris is from Georgia, co-captain Mike Carter is from Chicago, and forward Kendric Lee is from Arkansas. Many of the players are from Indiana, including Lleon Tillman (Evansville), Gerald Campbell (Gary), and Darryl Walker (Indianapolis). Danville native Levi Marshall, who played high school basketball at Bethesda Christian and now works for the Danville Fire Department, is also a member of the team.

ABA rules are designed to create exciting, fast-paced, high-scoring games. The most noticeable and unique aspect of ABA basketball is the 3D light – a flashing red light that is most often triggered by a team losing possession of the ball in their own backcourt. While the 3D light is flashing, the opposing team earns an extra point for any field goal made.

Today’s ABA is a resurrection of the original ABA that brought about many current NBA players and teams, including the Indiana Pacers. One of the cofounders of the original ABA and the Pacers is a cofounder of the modern-day ABA. Current ABA teams are located throughout the United States, Mexico, Australia, and Japan.

Tickets for Indiana Lyons games are just $10 per person at the door. Children and military veterans are $5. For more information, visit www.IndianaLyons.com or find them on Facebook.

I play on the radio from 7 am -1 pm weekdays on 98.9 FM WYRZ and WYRZ.org. Follow me on twitter @WYRZBrianScott or e-mail me at brian@wyrz.org.
Previous Don’t Let Ghost Tax Preparers Haunt Your Refund
Next FFA students gathered to serve the General Assembly