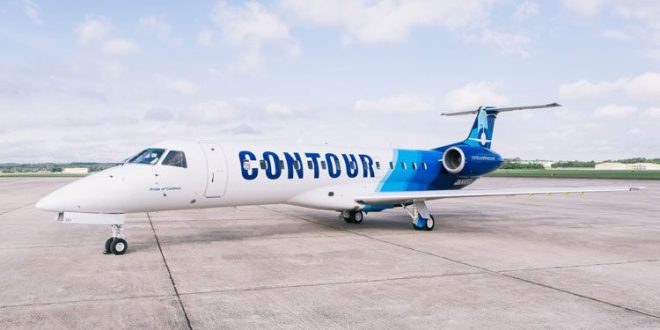 “Contour Airlines landing in Indiana is a huge win for the Hoosier state, and we’re extremely grateful that Contour is providing more career opportunities for Hoosiers,” said Indiana Governor Eric J. Holcomb. “As our pro-business reputation continues to spread around the country and around the world, new nonstop flights provide a critical link in connecting Hoosier companies, residents and tourists to destinations around the world.”

To support Contour’s growth in Indiana, the airline also announced plans to create up to 55 new jobs in central Indiana by the end of 2023. The Smyrna, Tennessee-based company is purchasing additional ERJ-135/145 aircraft and investing a significant amount over the next few years to establish its new base of operations, which will initially house two of the regional jets. Contour, one of the most punctual airlines in North America, according to OAG, plans to launch operations at the Indianapolis International Airport on June 10, 2020.

“In Indianapolis, individuals can enjoy a rich quality of life in an accessible community without sacrificing connectivity to family and friends across the country,” said Indianapolis Mayor Joe Hogsett. “Indy is proud to welcome Contour Airlines and its portfolio of premium regional flight options to the growing number of choices available in our market. Indianapolis International Airport’s continued growth helps to support the continued growth of our city.”

Known as the Crossroads of America, Indiana is within a one-day drive to 60% of the U.S. population and is home to more than 1,700 miles of interstate, three international ports, the second-largest FedEx hub in the world and the award-winning Indianapolis International Airport, which has been named the best airport in North America for the seventh consecutive year from Airports Council International. As part of Gov. Holcomb’s efforts to make Indiana a magnet for job creation, Indiana is committed to improving the state’s connectivity by attracting new nonstop and direct flights to and from Indiana’s airports.

With the addition of these new routes, Contour will serve 20 routes in 10 states, and Indianapolis will become the airline’s 2nd focus city – a destination from which it operates multiple nonstop routes – after Santa Barbara, California, with plans to expand its service to and from Indianapolis and offer more new nonstop routes in the future.

“Contour’s investment is a win-win all the way around,” said Mario Rodriguez, Indianapolis Airport Authority executive director. “Travelers have been demanding drive-market destinations, and we’ve been working for years to bring these to Indy and expand both business and leisure nonstop connectivity regionally. Jobs, a new record-breaking number of nonstop flights, and further proof you can get there from here! That’s a win for everybody.”

The Indiana Economic Development Corporation (IEDC) offered Corporate Flight Management, Inc. dba Contour Airlines up to $1.5 million in the form of a Minimum Revenue Guarantee, meaning the company only earns it if it does not meet its minimum revenue targets for the routes. Additionally, the IEDC offered the company up to $550,000 in conditional tax credits based on the company’s job creation plans. These incentives are performance-based, meaning the company is eligible to claim incentives once Hoosiers are hired. The city of Indianapolis supports the project at the request of Develop Indy.

About Contour Airlines
Established in 2016, Contour Airlines is a regional airline, currently serving 18 cities across the United States. Contour offers premium, low-fare flights that include a complimentary first checked bag and carry-on as well as in-flight snack and beverage service. Consistently rated as one of the most punctual airlines in North America, Contour operates a growing fleet of ERJ-135/145 jets, featuring leather seating and 36 inches of legroom in every row. Due to the ERJ’s three-abreast configuration, each passenger has either an aisle or window seat.

Tickets may be purchased through www.contourairlines.com or by calling Contour’s Customer Care department at (888) 332-6686.

About Indianapolis International Airport
Indianapolis International Airport (IND) generates an annual economic impact in Central Indiana of more than $5.4 billion without relying on state or local taxes to fund its operations. About 10,000 people work at the airport each day. IND serves more than 9.5 million business and leisure travelers each year averaging 143 daily flights to 53 nonstop destinations. Home of the world’s second-largest FedEx Express operation and the nation’s eighth-largest cargo facility, IND is committed to becoming the airport system of choice for both passenger and cargo service. For more information, visit www.IND.com.

I play on the radio from 7 am -1 pm weekdays on 98.9 FM WYRZ and WYRZ.org. Follow me on twitter @WYRZBrianScott or e-mail me at brian@wyrz.org.
Previous February Schedule Adjustments Include More Frequent Service to Airport
Next Insurance Claims Management Company Doubling Central Indiana Team