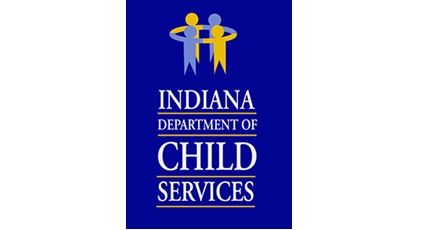 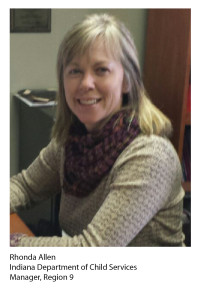 AVON (January 28, 2016)—The Indiana Department of Child Services (DCS) has appointed Rhonda Allen as manager of Region 9. She will provide broad oversight and supervision for the five DCS county offices within the region. These central-west counties include Boone, Hendricks, Montgomery, Morgan, and Putnam Counties. Also, she will serve as a field representative to the DCS’ central office in Indianapolis and communicate local office needs. Other duties include supervising the directors of the five county offices while also developing and administering budgets.

“Rhonda has a strong child welfare background, and we’re pleased to have her take the reins of Region 9,” said Jane Bisbee, DCS’ deputy director of Field Operations. “Her practical job experience as a family case manager, supervisor, and local office director will benefit families for years to come.”

In 1993, Allen began her DCS career as a Family Case Manager in Montgomery County. In 1999, she was promoted to Local Office Director (LOD) in Boone County. In 2005 she became Deputy Director in Marion County, then promoted to Regional Manager of Marion County in 2007. Two years later she accepted a position as the LOD in Hendricks County and was in that position until her appointment to Manager of Region 9.

I play on the radio from 7 am -1 pm weekdays on 98.9 FM WYRZ and WYRZ.org. Follow me on twitter @WYRZBrianScott or e-mail me at brian@wyrz.org.
Previous Electrical Grid Management Firm Adding 80+ High-Wage Jobs at Hamilton County Headquarters
Next Edinburgh Man Dies Following Early Morning Crash on I-65 in Shelby County