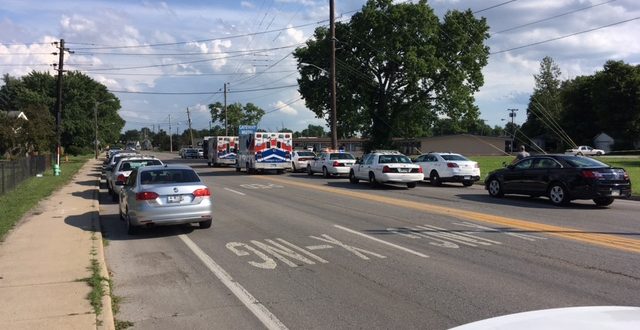 INDIANAPOLIS – Indianapolis Metropolitan Police Department (IMPD) SWAT Negotiators responded to hostage situation on the city’s west side and negotiate the release of the hostage and peaceful surrender of the suspect after a nearly four-hour standoff.

Just after 4:45 p.m. on 06/21/2017, officers with the IMPD were dispatched to the Gateway Inn, located in the 1700 block of Lafayette Rd, on calls to assist Indiana Department of Corrections Parole Officers. Responding officers learned that the target, 44-year-old Tracy Lloyd, was wanted on a Parole Violation and Parole officers were preparing to enter his hotel room when he threatened to shoot his girlfriend and officers if they came in. The Parole officers immediately backed away and called for assistance.

IMPD supervisors then requested the assistance of IMPD SWAT given the volatile situation involving a hostage. SWAT and Negotiators responded in a full call out. While responding, officers on-scene established a perimeter, closed down part of Lafayette Rd, and evacuated a nearby park and residents. Negotiations were ongoing throughout the entire incident and were very tense as the suspect allegedly threatened to kill his girlfriend and police if they made entry. Negotiators, with their training and experience, were able to secure the release of the female. A short time after the female was released, Lloyd surrendered peacefully.

IEMS were standing by to evaluate the female, who did not appear to be suffering from any injuries. Lloyd was quickly taken into custody after he came out. Detectives had obtained a search warrant for the room in question and did locate a firearm that was allegedly used by the suspect during the incident. Lloyd was arrested for his parole violation and was preliminarily charged with confinement, pointing a firearm, possession of a firearm by a serious violent felon, and interfering with the reporting of a crime. He was later transported to the Arrestee Processing Center for booking. The Marion County Prosecutor’s Office will review the case for a charging decision.

Numerous IMPD officers were involved in this incident to secure the scene and ensure the safety of the public. SWAT and SWAT Negotiators were essential to the peaceful conclusion of this incident. We would like to thank our partners with the Indiana Department of Corrections, Indianapolis Fire Department, Indianapolis Emergency Medical Services, and Fire Buffs for their support and efforts to ensure a safe resolution to this incident.

Anyone with information about this incident is asked to call Crime Stoppers of Central Indiana at 317.262.8477 or (TIPS).  Citizens can also download the mobile P3tips app for Apple or Android phones to submit a mobile tip, or go to www.CrimeTips.org to submit a web tip. You will remain anonymous and may be eligible for a cash reward of up to $1000 if the information leads to a felony arrest.  Only tips submitted directly and anonymously to Crime Stoppers are eligible for these cash rewards. This release may be updated as more information becomes available. Information given via Crime Stoppers should be considered anonymous.

I play on the radio from 7 am -1 pm weekdays on 98.9 FM WYRZ and WYRZ.org. Follow me on twitter @WYRZBrianScott or e-mail me at brian@wyrz.org.
Previous Homicide detectives investigate after a body was recovered on city’s north side
Next IMPD homicide detectives investigate the circumstances of a deadly shooting on the Indianapolis’ northwest side