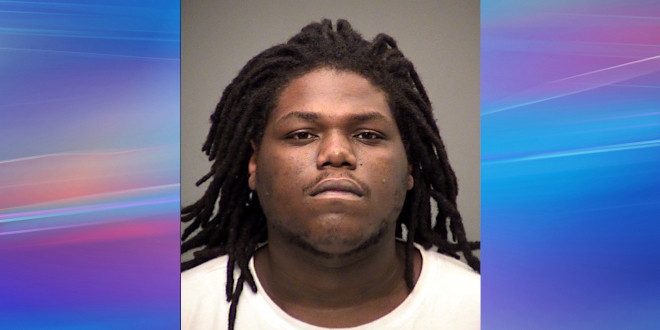 INDIANAPOLIS –  Recently, detectives from the Indianapolis Metropolitan Police Department (IMPD) Covert Robbery Unit(CRU) were looking into a series of robberies of Metro PCS stores. On November 25th CRU detectives located the suspect vehicle they believe had been used in multiple Metro PCS robberies. CRU detectives began surveillance on the vehicle and occupants. During this investigation a traffic stop on the suspect vehicle led detectives to the driver, later identified as 21-year-old Alfonso Sargent after he fled from the vehicle on foot.  While Sargent was running he fell to the ground and came up with a handgun in his hands. Officers showed restraint as Sargent ran away and was observed by officers going into the common entrance of a nearby apartment building A preimeter was set  up immediately and Sargent was located within minutes and apprehended witout incident. Next to where Sargent was apprehended was a broken handgun and live rounds of ammunition. Officers then walked the route Sargents fled and located a loaded handgun. Detective’s immediately recognized Sargent from the IMPD Bolo’s of the Metro PCS, at the time he was apprehended,  Sargent was wearing the navy blue Nike hoodie he wore in the robberies. Sargent was taken into custody and later booked into the Marion County Jail.

Detectives also believe Alonzo Sargent may have committed other robberies elsewhere in the city. The investigation into those incidents continues. The Marion County Prosecutors Office will review all cases and make a charging decision.

Anyone with information should call Crime Stoppers of Central Indiana at 317.262.8477 or (TIPS).  Citizens can also download the mobile P3tips app for Apple or Android phones to submit a mobile tip, or go to www.CrimeTips.org to submit a web tip. You will remain anonymous and may be eligible for a cash reward of up to $1000 if the information leads to a felony arrest.  Only tips submitted directly and anonymously to Crime Stoppers are eligible for these cash rewards.

I play on the radio from 7 am -1 pm weekdays on 98.9 FM WYRZ and WYRZ.org. Follow me on twitter @WYRZBrianScott or e-mail me at brian@wyrz.org.
Previous IndyGo Board Approves Free Rides for Christmas and New Year's Eve for First Time; Funds Re-Allocated for Capital Spending
Next IMPD Detectives Make Violent Serial Robber Arrest