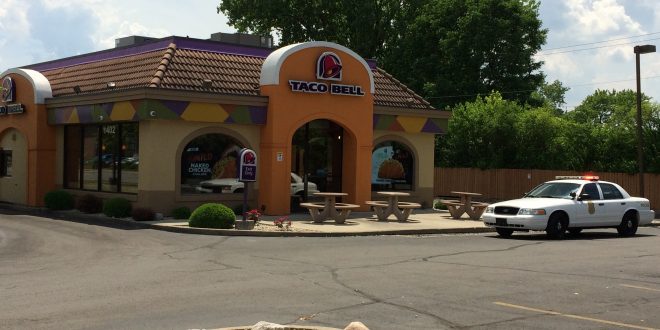 On Wednesday, May 23, 2018, at approximately 8:55 pm IMPD east district officers were dispatched to the Taco Bell located at 1402 N. Arlington Avenue on a robbery in progress.  A responding officer broadcasted the suspect description over the radio and that the suspect was armed with a handgun.  A short time later, Officer Daniel Hiser observed an individual matching the suspect’s description in the passenger seat of a car near the Taco Bell.  Officer Hiser stopped the vehicle and the suspect, 24-year-old Aaron Nichols, fled from the vehicle.  Officer Hiser took Nichols into custody about a block away.  Nichols was found to be in possession of a handgun and was positively identified as the suspect in the robbery.  Nichols was arrested for Robbery, Resisting Law Enforcement, and Possession of a Handgun Without a License.

On Friday, May 25, 2018, at approximately 8:55 pm, at the Speedway gas station located at 5935 E. Thompson Road, off-duty IMPD Officer Dan Majors was getting gas when he was informed by a witness the gas station was being robbed at gun point.  Officer Majors radioed for assistance and observed a male, identified as 26-year-old Cody Young, with no shirt with a gas mask on his face, jump behind the counter.  Officer Majors watched Young exit the business and ordered him to stop, but Young walked away dropping money.  Officer Majors continued to give Young orders and was taken into custody without further incident.  IMPD Southeast and Beech Grove officers arrived shortly thereafter to assist.  Witnesses told detectives Young yelled at clerks to give him the money, and Young then took money from the registers.  Young was arrested for Robbery.

These two cases, just days apart demonstrate the excellent work IMPD officers and detectives do on a regular basis to identify and arrest those responsible for violent crime.  We should also recognize the efforts of our community, who helped us during and after these incidents.  Collaborating with the community continues to be a focus for IMPD.  IMPD encourages members of the community, if they see something, say something, by calling 911, CrimeStoppers at 262-TIPS, or by contact with an officer directly.

Formal charging decisions are made by the Marion County Prosecutor’s Office.

I play on the radio from 7 am -1 pm weekdays on 98.9 FM WYRZ and WYRZ.org. Follow me on twitter @WYRZBrianScott or e-mail me at brian@wyrz.org.
Previous Take these precautions to prevent recreational water illnesses and injuries
Next ISP Bloomington Detectives Investigating Attempted Murder Case