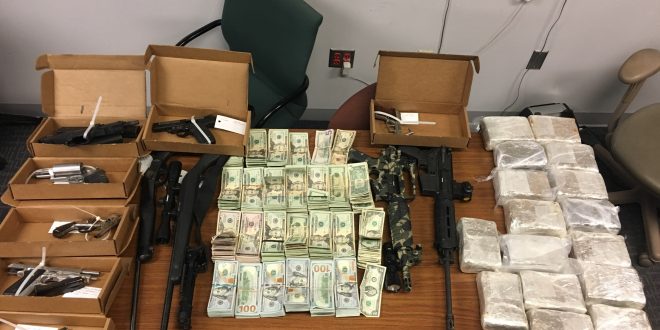 On December 12, 2017 just before 3:30 p.m. officers with Indianapolis Metropolitan Police Department (IMPD) attempted to make a traffic stop on a vehicle in the 1500 block of East Prospect Street.   The driver refused to stop and led officers on a pursuit that ended in the 2500 block of Depauw Road.  At this time, the driver and passenger fled on foot into a residence in the 2500 block of Endsley Drive.  Shortly thereafter the two males surrendered themselves to officers.  The vehicle they were driving was reported stolen from the city of Franklin Indiana earlier this month.  As officers continued their investigation they were able to recover 16 to 20 lbs. of marijuana, 11 guns, 2 stolen vehicles and over 91 thousand dollars in cash.

Officers arrested 18 year-old Brian Woods, 41 year-old Larry Gross, 52 year-old Robbie Bratcher and a juvenile in connections with this incident.  All charging information will be released by the Marion County Prosecutor’s Office. The IMPD greatly appreciate the cooperation and tips provided by the community to make our city a safer place to live.

IMPD continues to urge anyone with information on criminal activity to call Crime Stoppers of Central Indiana at 317.262.8477 or (TIPS). Citizens can also download the mobile P3tips app for Apple or Android phones to submit a mobile tip, or go to www.CrimeTips.org to submit a web tip. You will remain anonymous and may be eligible for a cash reward of up to $1000 if the information leads to a felony arrest.  Only tips submitted directly and anonymously to Crime Stoppers are eligible for these cash rewards. Information given via Crime Stoppers should be considered anonymous.

I play on the radio from 7 am -1 pm weekdays on 98.9 FM WYRZ and WYRZ.org. Follow me on twitter @WYRZBrianScott or e-mail me at brian@wyrz.org.
Previous Avon Community School Corporation Awarded $98,000 Title IV Grant from US Dept. of Education
Next Indiana Secretary of State Connie Lawson announces top investor threats