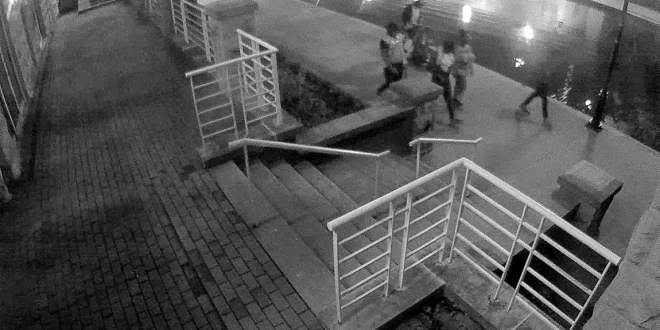 On Sunday, July 5, 2020, just before 3:30 a.m., IMPD Downtown District officers were dispatched to 729 Canal Court on a report of a person shot. When officers arrived, they located an adult female who appeared to have injuries consistent with a gunshot wound(s). Officers called for the assistance of the Indianapolis Emergency Medical Services who responded and transported the female, later identified as 24-year-old Jessica Doty-Whitaker, to an area hospital in critical condition. Despite the best life-saving efforts provided by medical staff, Jessica Doty-Whitaker died from her injuries several hours later.

Homicide detectives responded and immediately began canvassing the area for witnesses. Detectives have obtained pictures of several people walking northbound, on the east side of the canal from Indiana Ave.  The people depicted in the pictures may be witnesses and/or persons of interest in the death of Jessica Doty-Whitaker.  We are asking the communities assistance in identifying anyone in the photos, or information that may lead to the identity any of these individuals, that you contact the IMPD Homicide office at 317-327-3475.

Anyone with information about this incident should call Crime Stoppers of Central Indiana at 317.262.8477 or (TIPS).  Citizens can also download the mobile P3tips app for Apple or Android phones to submit a mobile tip, or go to www.CrimeTips.org to submit a web tip. You will remain anonymous and may be eligible for a cash reward of up to $1000 if the information leads to a felony arrest.  Only tips submitted directly and anonymously to Crime Stoppers are eligible for these cash rewards.

I play on the radio from 7 am -1 pm weekdays on 98.9 FM WYRZ and WYRZ.org. Follow me on twitter @WYRZBrianScott or e-mail me at brian@wyrz.org.
Previous Community Foundation Awards $15,000 Grant to Hendricks County Public Schools
Next Kroger Will Require Masks in All Stores Beginning July 22