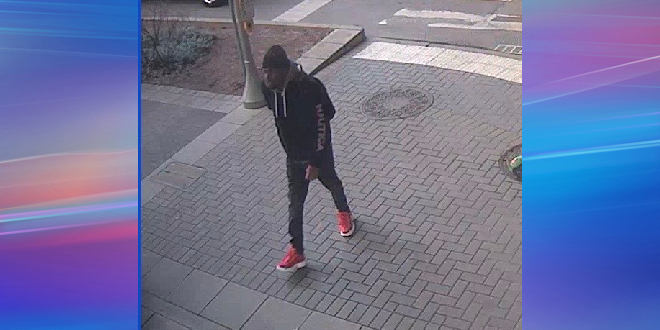 INDIANAPOLIS – Indianapolis Metropolitan Police Department (IMPD) Homicide detectives are asking for the communities assistance in identifying the male in the attached photo.  Detectives are attempting to gather information on the black male pictured wearing a dark colored hat, dark colored Nautica sweatshirt, jeans and red tennis shoes.  At this time, it is believed the male was with the victim at the time of the shooting.

On February 20, 2020, just before 2:30 p.m., Downtown District officers were dispatched to the 100 block of W. Maryland Street on a report of a person down.  When officers arrived, they located an adult male who appeared to have injuries consistent with a gunshot wound. Officers called for the assistance of Indianapolis EMS who responded and transported the male to an area hospital in critical condition. Despite the best life-saving efforts provided by medical staff, the male died from his injuries.

Homicide detectives responded and immediately began canvassing the area for witnesses. The Indianapolis-Marion County Forensic Services Agency responded to assist in identifying and collecting potential forensic evidence. The Marion County Coroner’s Office will be assisting and will determine the exact manner and cause of death. The MCCO will release the name of the decedent once proper next-of-kin notification has been made.

I play on the radio from 7 am -1 pm weekdays on 98.9 FM WYRZ and WYRZ.org. Follow me on twitter @WYRZBrianScott or e-mail me at brian@wyrz.org.
Previous Man Charged in Connection with 2019 South-side Homicide
Next ORV accident in Morgan County leaves two people injured