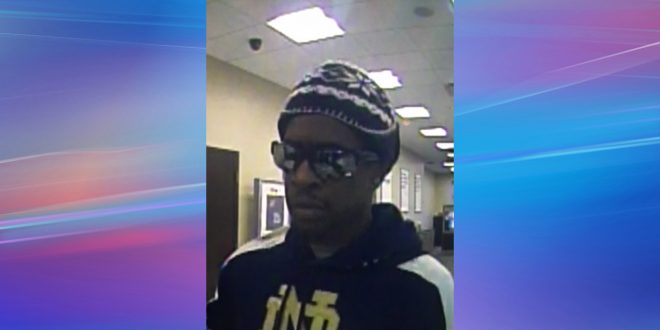 Just after 10 a.m., on January 23, 2018, officers with the IMPD were dispatched to the Key Bank located in the 7400 block of US 31 S. Indianapolis, on a report of a robbery that had just occurred.  Responding officers arrived and met with the complainant. FBI Violent Crimes Task Force was then notified and obtained the attached still image. 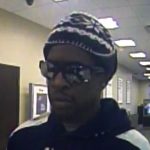 The depicted black male walked into the Key Bank, displayed a note to the teller and exited the front of the bank with an undisclosed amount of money. The black male is described as 5’9” -5’11”, 30-40 years old, thin build, wearing a blue Notre Dame sweatshirt with a white stripe on the sleeves, a black and white knit cap and dark sunglasses.

Any information regarding this suspect can be forwarded to FBI Violent Crimes Task Force at 317-595-4000 or contact Crime Stoppers of Central Indiana at 317-262-TIPS (8477). Information given via Crime Stoppers should be considered anonymous. This release may be updated if additional information becomes available.

I play on the radio from 7 am -1 pm weekdays on 98.9 FM WYRZ and WYRZ.org. Follow me on twitter @WYRZBrianScott or e-mail me at brian@wyrz.org.
Previous Donnelly: Positive Progress on Health Care, Necessary Work Still to Do
Next Indiana Department of Education Launches New Teacher Recruitment and Retention Campaign