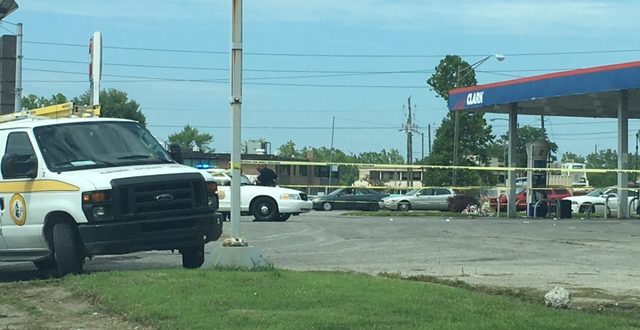 Detectives have identified 21-year-old Trevell Patton of Indianapolis, as the alleged shooter that resulted in 31-year-old Lavon Beverly being shot and 22-year-old Kaycie Glenn being struck by flying debris. It was originally thought that Glenn had been shot, but later revealed that she had received a possible laceration from flying debris. It was also determined that she had no direct involvement in this incident.

IMPD detectives were able to determine through the course of the investigation that this incident stemmed from a verbal confrontation between Beverly, Patton and other involved suspects who have yet to be identified. Detectives are currently seeking to identify a person of interest that fled the scene in a black Chevy Impala. A BOLO with additional information about the person of interest and wanted vehicle will be forthcoming.

Patton was arrested and preliminarily charged with Aggravated Battery. The Marion County Prosecutor’s Office will review the case and make a final charging decision. Beverly remains in critical but stable condition at Eskenazi Hospital. Anyone with information about this incident is urged to contact Crime Stoppers of Central Indiana at (317)262-TIPS. This release may be updated as more information becomes available.

I play on the radio from 7 am -1 pm weekdays on 98.9 FM WYRZ and WYRZ.org. Follow me on twitter @WYRZBrianScott or e-mail me at brian@wyrz.org.
Previous Avon Schools Announces Chris Hill as Teacher of the Year
Next Hendricks County Woman Wins National Selfie Contest, Donates Prize to Parks