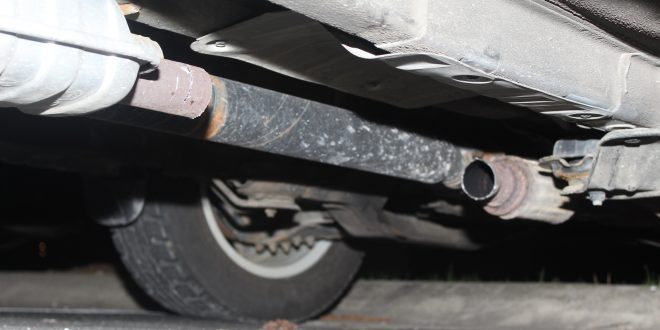 At approximately 2:00 a.m., IMPD Detectives spotted a vehicle believed to be involved in several recent catalytic converter thefts. While investigating, it was discovered that the vehicle in question was actively involved in another theft at that time.

IMPD detectives requested the assistance of IMPD’s Southeast District officers to stop the vehicle. The driver refused to stop, and officers pursued the vehicle until losing sight of it at the split of Interstate-70 and Interstate-65. IMPD Southwest District officers located the suspect’s vehicle a short time later near the intersection of McCarty and Shepard Streets. A few blocks away, officers located the suspect, 19-year-old Cameron McDougalle, where he was quickly taken into custody.

McDougalle was arrested on suspicion of theft. The Marion County Prosecutor’s Office will review the case and make a final charging decision. The quick actions by responding officers and the thorough follow-up investigation conducted by detectives further demonstrates their commitment to the City of Indianapolis.

I play on the radio from 7 am -1 pm weekdays on 98.9 FM WYRZ and WYRZ.org. Follow me on twitter @WYRZBrianScott or e-mail me at brian@wyrz.org.
Previous IMPD, FBI collaborate to arrest trio suspected in multiple armed robberies
Next Construction Startup to Expand Operations, Services in Central Indiana