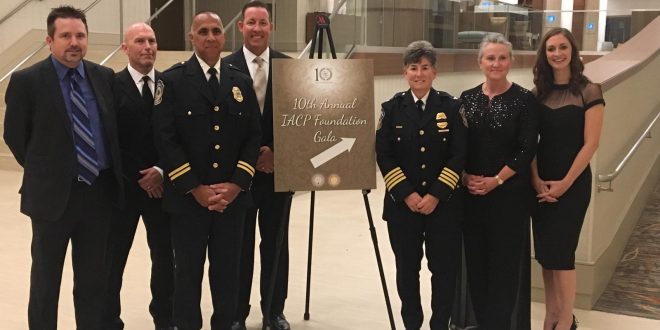 Each year the awards committee selects four finalists from the thousands of nominations received from around the world. Nanavaty was selected as a finalist for his work on a proactive approach to officer wellness and professional development, and the IMPD was identified as a model agency.

“I was honored to be selected as a finalist for the IACP Officer of the Year. However, the honor belongs to the entire department and those who have supported the wellness endeavor and created a culture at IMPD where officer and agency health is paramount, including Chief Riggs, Chief Roach, the Fraternal Order of Police Lodge 86, Mayor Hogsett and the City- County Council,” Nanavaty said. “Also contributing to the success of the program are Life Services EAP, Mike and Debbie Laird and Jim Alsup at the public agency training council (PATC).  Also IMPD’s Diane Jackelen, Lea Gurnell, Wanda Lambert and the Training staff, and Julie Black and the Finance team, whom we could not function efficiently without.”

Capt. William Villanova of the Prefecture De Police De Paris, France, was ultimately selected by the IACP as Officer of the Year for his heroic efforts during the Nov. 13, 2015, active shooter incident at the Bataclan concert hall where 89 people were killed and more than 200 injured.

As a finalist, Nanavaty received a beautiful framed award he will be sharing for display in the IMPD Headquarters. He was accompanied to the black-tie event by his wife, Cindy, along with IMPD Dep. Chief Valerie Cunningham, and the OPD staff – Lt. Sherri Horn, Sgt. Aaron Snyder, Officer Nicole Juday, Officer Kim McGivern, and Det. Doug Pearson. Also attending was Lawrence Police Department Chief David Hofmann, a former member of the OPDW while at IMPD.

This is the 50th Anniversary of the award. More information on the IACP can be found at http://www.iacp.org.

I play on the radio from 7 am -1 pm weekdays on 98.9 FM WYRZ and WYRZ.org. Follow me on twitter @WYRZBrianScott or e-mail me at brian@wyrz.org.
Previous One arrested in incident related to officer involved shooting
Next I-65 Northbound will have One Lane Closed Overnight in Boone County Next Week