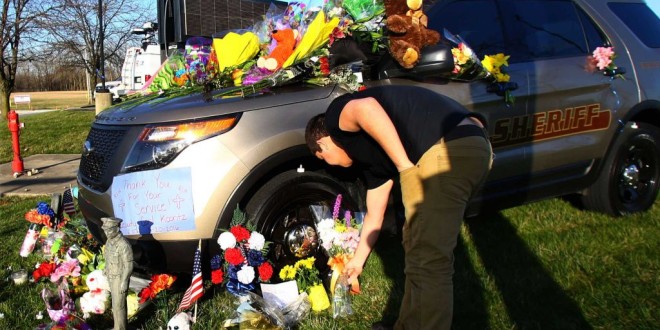 At approximately 12:30 a.m. Sunday, Koontz, along with Howard County Sheriff Sergeant Jordan J. Buckley and officers from the Kokomo Police Department were attempting to serve a search warrant at 380 Chandler Street in Russiaville, southwest of Kokomo.

Koontz and 35 year old Buckley were wounded during the exchange.  A Russiaville officer and other deputies were able to extract the wounded officers from the residence and provide first aid.  Both Koontz and Buckley were transported initially to Howard Regional Hospital, stabilized and then airlifted to Methodist Hospital in Indianapolis.

Buckley has since been released from the hospital.

Deputies had secured the area around the residence, removing residents adjacent to the scene for their safety.  Howard County SWAT, Kokomo Police SWAT and Indiana State Police SWAT responded and attempts to contact the occupant of the residence began about 2:30 a.m. with no response.  These attempts continued for about two hours.  SWAT personnel were able to confirm an individual was deceased inside of the residence.  Police have identified the suspect as Evan Dorsey. During a press conference, Howard County Sheriff Steven Rogers said the 25 year old Dorsey was wanted for failure to appear in court on a charge of possession of a syringe.

Indiana State Police is the lead investigative agency and while the investigation is still in its early stages, crime scene investigators and detectives are working diligently to determine the dynamics of the incident.

I play on the radio from 7 am -1 pm weekdays on 98.9 FM WYRZ and WYRZ.org. Follow me on twitter @WYRZBrianScott or e-mail me at brian@wyrz.org.
Previous IMPD Arrests Man for Intimidation Near IUPUI Campus
Next Weekend Crash Claimed the Life of an Indianapolis Woman