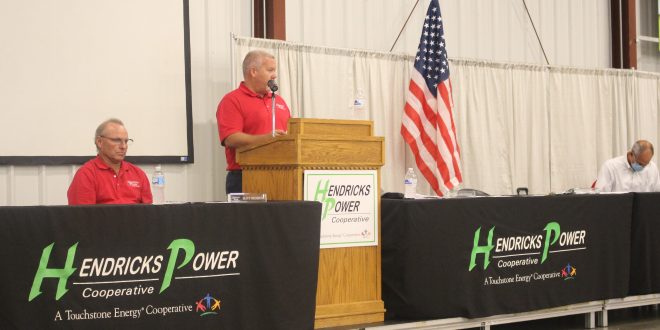 Avon, IN —   Hendricks Power Cooperative hosted its 84th Annual Meeting on Thursday, July 23rd at the Hendricks County 4-H Fairgrounds, with the board of directors’ election voting taking place from July 20th to July 23rd. Members were informed of cooperative business updates, including new practices due to COVID-19, patronage retirement, advanced telecommunications efforts, and growth and reliability projects. Board incumbents Hal Truax, Area 4, and Keith Cooper, Area 6, were re-elected. Two candidates vied for the position in Area 5, and David Thomas was elected to serve the co-op.

Thomas is a lifelong resident of Hendricks Co. and a graduate of Cascade High School. He and his wife, Debbie, currently reside in the New Winchester area and have been Hendricks Power Cooperative members for more than 35 years. Thomas recently retired from the Kroger Company after 42 years of service, working his way from a part-time bagger to management and on to Division Retail Operations Manager, encompassing 140 stores in Indiana and surrounding states. During his career, David was twice awarded the Kroger President’s Award, an honorable award presented annually to an associate who best models the company’s core values of Integrity, Honesty, Diversity, Inclusion, Safety, and Respect.

“I am honored by the outcome of the election and look forward to serving on the Board and representing the members of Hendricks Power Cooperative,” stated Thomas.

“David will be a great asset to our board of directors,” said Don Stinson, president of the board. “His business management and customer service background will be extremely beneficial to help make informed Cooperative decisions.”

Area 5 consists of all territory served in Marion Township in Hendricks County and Jackson Township in Putnam County. Thomas now represents members residing in this area.  Over 1,400 people registered and voted before the meeting, each receiving a $10 bill credit for their participation. Members were also entered to win one of five (5) $500 energy credits. Energy credit winners were Stephen Miller, Avon; Brent and Rachel Bowen, Coatesville; Ken Lavenberg, Avon; Terry Newkirk, Fillmore; and Ted Caldwell, Danville

I play on the radio from 7 am -1 pm weekdays on 98.9 FM WYRZ and WYRZ.org. Follow me on twitter @WYRZBrianScott or e-mail me at brian@wyrz.org.
Previous Traffic pattern changes upcoming on US 231 under I-70
Next Modern Rockville Road Feedback Prioritizes Safety and Congestion Solutions