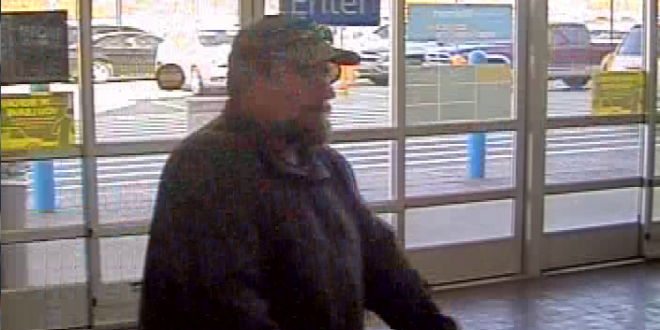 The Hendricks County Sheriff’s Department is asking for help.

The Hendricks County Sheriff’s Department is asking for help with identifying the man and/or vehicle shown in the pictures. On 12/28/2016 at approximately 11:54 a.m. the unknown male entered the Walmart store in Camby, Indiana. The male went to the electronics isle and selected an HP Computer and placed it in a cart, the male immediately exited the store with the stolen property through an emergency exit door located next to the Tire Lube entrance. Another unidentified person was with the suspect at the time of the theft but stayed in the vehicle. The unknown male is known to visit other Walmart stores in the surrounding Indianapolis area. The truck is described as a dark colored, Ford F150, extended cab with 4X4 on the sides near the rear of the vehicle.
Anyone with information is asked to contact Sgt. Chuck Morefield at the Hendricks County Sheriff’s Department’s Investigation Division. 317-745-4052.