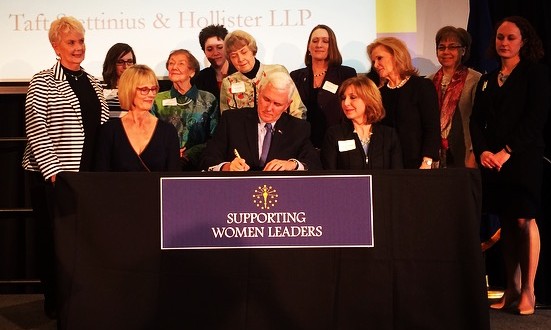 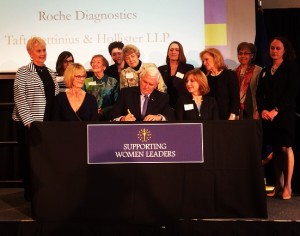 “Throughout Indiana Code, there are references to ‘he’ when we clearly have qualified and accomplished women serving in office,” said Governor Pence. “As a father, I cannot help but think about my daughters when I see references like these and the message it sends not only to them, but to young women across our state. The enactment of House Enrolled Act 1173 recognizes the incalculable leadership provided by women leaders throughout state government. I’m proud to sign it into law and hope it serves as a source of encouragement for future generations of women leaders here in Indiana.”

“I applaud the Governor and Indiana General Assembly for sending an empowering message to women with the passage and signing of House Enrolled Act 1173,” said State Auditor Suzanne Crouch. “In Indiana, women have an opportunity to carry the torch and write the next chapter of our State’s history. As more women participate in our government and in the marketplace of ideas, they can help resolve complex issues with thoughtful solutions, ultimately taking our state further than it’s ever been. HEA 1173 brings us closer to that goal.”

I play on the radio from 7 am -1 pm weekdays on 98.9 FM WYRZ and WYRZ.org. Follow me on twitter @WYRZBrianScott or e-mail me at brian@wyrz.org.
Previous Motorcycle Ride Benefiting the Koontz Family this Weekend
Next February Indiana Employment Report