INDIANAPOLIS (March 25, 2016) – More than 20,000 Hoosiers entered the labor force in February for a second consecutive month, resulting in a sharp increase in Indiana’s labor force participation rate. The percentage of the working-age population that is employed or looking for work in Indiana continues to outpace the national average by nearly two percent (64.6 percent vs. 62.9 percent). Of the 43,708 Hoosiers who entered the labor force during the past two months, 35,682 found employment.

Indiana’s seasonally adjusted unemployment rate, a U.S. Bureau of Labor Statistics indicator that reflects the number of unemployed people as a percentage of the labor force, rose by 0.1 percent over the previous month to 4.7 percent in February. Indiana’s unemployment rate remains below the national average of 4.9 percent.

“In the past two months, more than 35,000 Hoosiers rejoined the labor force and found employment due to the strong Hoosier economy,” said Steven J. Braun, Commissioner of the Indiana Department of Workforce Development. “This growth is even more impressive when compared to the 11,376 individuals who joined the labor force in January and February of 2015.”

Commissioner Braun also noted that initial unemployment insurance claims remain at the state’s lowest level in more than a decade. 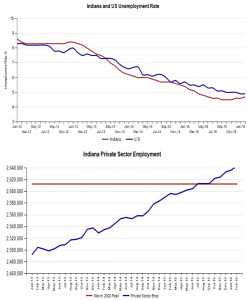 Private sector employment increased by 6,900 jobs in February. The highest levels of growth occurred in the Trade, Transportation & Utilities (+5,000), Private Education & Health Services (+4,500) and Leisure & Hospitality (+1,300) sectors. Gains were partially offset by contraction in the Professional & Business Services (-3,000) and Manufacturing (-2,600) sectors. Over the past three years, Indiana’s private sector has grown by more than 150,000 jobs.

I play on the radio from 7 am -1 pm weekdays on 98.9 FM WYRZ and WYRZ.org. Follow me on twitter @WYRZBrianScott or e-mail me at brian@wyrz.org.
Previous Governor Pence Signs Legislation Supporting Women Leaders in State Government
Next IMPD officers apprehend three juvenile robbery suspects on the city’s East side after they allegedly rob a local business