“Today, we are saying thank you to Indiana’s dedicated teachers by ensuring that the results of our new test with higher standards will not negatively impact them, their families, or our schools,” said Governor Pence. “These new laws ensure that teacher compensation and bonuses will not be affected by the results of our recent ISTEP test and will ensure that our schools’ performance is fairly reflected when A-F grades are assigned later this year. I am grateful for the swift and bipartisan efforts by members of the General Assembly and the Superintendent that put our kids, schools, and teachers first.” 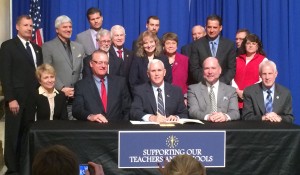 I play on the radio from 7 am -1 pm weekdays on 98.9 FM WYRZ and WYRZ.org. Follow me on twitter @WYRZBrianScott or e-mail me at brian@wyrz.org.
Previous Indiana Recycling Specialty Plate now Available
Next Brownsburg Town Council Reviews Citizen Survey Results