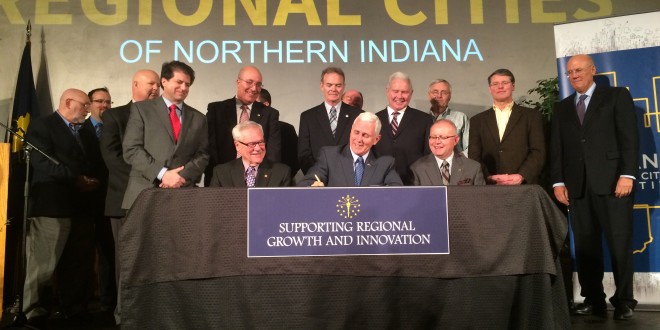 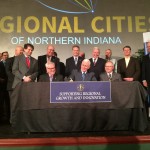 Indianapolis – Governor Mike Pence today joined regional leaders in North Central Indiana to ceremonially sign House Enrolled Act (HEA) 1001, which will provide $42 million for each of the Regional Cities initiatives. The Governor signed HEA 1001, which goes into effect July 1, 2016, into law on March 23, 2016.

“Our Indiana Regional Cities Initiative has sparked unprecedented collaboration and will spur economic development projects to improve the quality of life in regions across our state,” said Governor Pence. “It is imperative that we help accelerate the transformation of our regions into nationally-recognized places to live, work, and play, and I applaud the North Central region for developing an innovative plan that looks ahead to Indiana’s third century.”

The Indiana Regional Cities Initiative encourages communities to work together to develop and implement regional plans. HEA 1001 allocates $42 million for each of the Regional Cities initiatives, ensuring three regional development plans in North Central, Northeast, and Southwest Indiana receive state funding. Together, these plans outline 100 quality of place projects totaling more than $2 billion in combined public and private investment. More than half of these planned projects, including new riverfront developments, revitalized downtowns and expanded trail systems, are currently scheduled to be completed by the end of 2018.

I play on the radio from 7 am -1 pm weekdays on 98.9 FM WYRZ and WYRZ.org. Follow me on twitter @WYRZBrianScott or e-mail me at brian@wyrz.org.
Previous Revolutionary West Side Networking Group Featured on Town of Brownsburg Website
Next Governor Pence Ceremonially Signs ‘Kirk’s Law’