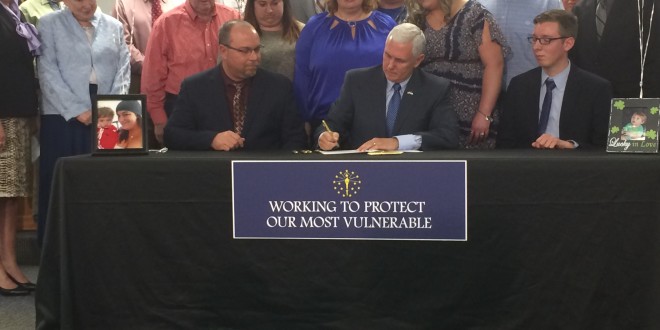 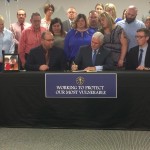 Indianapolis – Governor Mike Pence today ceremonially signed Senate Enrolled Act 357, or “Kirk’s Law” in Goshen, Ind. “Kirk’s Law” requires the Division of State Court Administration to create a registry of individuals convicted of a crime of child abuse. The registry will be searchable and available to the public. “Kirk’s Law” is named after 19-month-old Kirk Coleman, who prosecutors say died in the care of a provider who had a previous record of child abuse. The Governor signed SEA 357, which goes into effect July 1, 2016, into law on March 21, 2016. The legislation requires that the registry be up and running no later than July 1, 2017.

“Senate Enrolled Act 357 is about protecting our most vulnerable Hoosiers – our children,” said Governor Pence. “This bill provides parents a way to make sure the person they have chosen to take care of their child has not been convicted of child abuse. It is my hope that this child abuse registry will become a resource to help ensure that no child is left with someone who may harm them.”

A photo from today’s signing ceremony can be found attached. For a full list of bills Governor Pence has signed, visit Bill Watch: http://www.in.gov/gov/2016billwatch.htm.

I play on the radio from 7 am -1 pm weekdays on 98.9 FM WYRZ and WYRZ.org. Follow me on twitter @WYRZBrianScott or e-mail me at brian@wyrz.org.
Previous Governor Pence Ceremonially Signs Regional Cities Bill in Goshen
Next Three Teens Arrested in Connection with Hendricks County Bank Robberies