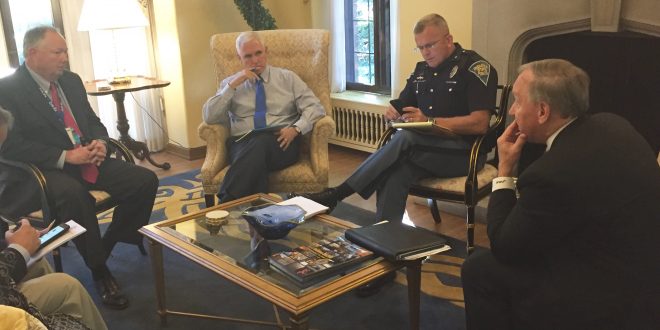 Indianapolis – Governor Mike Pence today issued the following statement after getting briefed by his Indiana public safety and homeland security teams in the wake of the terrorist attacks in New York, New Jersey and Minnesota.

“Our hearts and prayers go out to the injured and brave first responders following the terrorist attacks in New York, New Jersey and Minnesota this weekend.

“This morning, I met with my public safety and homeland security teams at the Governor’s Residence for a full briefing on the latest on investigations regarding the terrorist attacks this past weekend. There is no higher priority than the safety and security of our citizens, and Hoosiers should feel confident that the state of Indiana is taking all appropriate steps to keep Hoosiers safe. In these uncertain times, the greatest safeguard for our communities is the vigilance of our citizens. We remind every Hoosier, if you see something, say something. If you observe suspicious activity, contact law enforcement immediately.”

If citizens see something suspicious, say something by contacting the Indiana Intelligence Fusion Center (IIFC) at 1-877-226-1026 or iifc@iifc.in.gov. The purpose of IIFC is to collect, integrate, evaluate, analyze and disseminate information and intelligence to support local, state and federal agencies in detecting, preventing, and responding to criminal and terrorist activity. The IIFC co-locates representatives of these agencies to share information and to facilitate joint efforts to prevent and solve crimes to protect the public.

Also, the Indiana Department of Homeland Security has a smartphone app that can be downloaded for free on Apple and Android system smartphones. Search for the term “Indiana Homeland Security Report Hazards.” Images and texts can be sent to the IDHS Watch Desk. While submissions are monitored, imminent threats should be reported to 911.

Other options are on-site security or local law enforcement administrative phone numbers. In any case, if danger is imminent, call 911.

I play on the radio from 7 am -1 pm weekdays on 98.9 FM WYRZ and WYRZ.org. Follow me on twitter @WYRZBrianScott or e-mail me at brian@wyrz.org.
Previous Get #ReadyToVote! September is National Voter Registration Month
Next State Agencies, Colleges Combine Efforts to Help Hoosiers Affected by ITT Technical Institute Closure