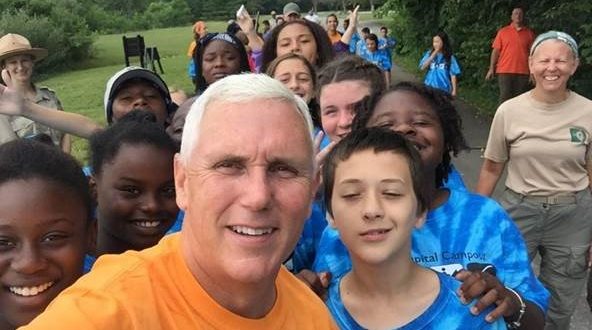 Indianapolis – Today, Governor Mike Pence hosted a Mile with Mike event at the Department of Natural Resources’ Capital Campout at Fort Harrison State Park. The Capital Campout is one of more than a dozen outdoor camping experiences hosted by governors across the nation to promote outdoor recreation as part of Great Outdoors Month 2016. Governor Pence declared June as Great Outdoors Month in the State of Indiana, noted in the proclamation attached.

“As we mark Indiana State Parks’ centennial year, it is altogether fitting that we share with young Hoosiers the rich history and beauty our State Parks have to offer at this year’s Capital Campout,” said Governor Pence. “From the banks of the Wabash, to the shores of Lake Michigan, to the tree tops of Brown County State Park, I encourage Hoosiers across the state to explore Indiana’s unique, natural treasures.”

More than 50 Capital Campout participants from Indianapolis-area youth centers hiked around Delaware Lake with the Governor after the campers participated in fishing, horseback riding, outdoor cooking, and a variety of other activities. Since 2013, the Governor has participated in Mile with Mike events across the state of Indiana to encourage health and exercise among Hoosiers.

“Indiana’s Capital Campout is one of several tools that the Indiana Department of Natural Resources is using to encourage youngsters to get outdoors,” said DNR Director Cam Clark.

I play on the radio from 7 am -1 pm weekdays on 98.9 FM WYRZ and WYRZ.org. Follow me on twitter @WYRZBrianScott or e-mail me at brian@wyrz.org.
Previous Coats Statement on #BetterWay Comprehensive Tax Reform
Next ISDA announces Indiana Grain Buyers and Warehouse Licensing Agency promotions