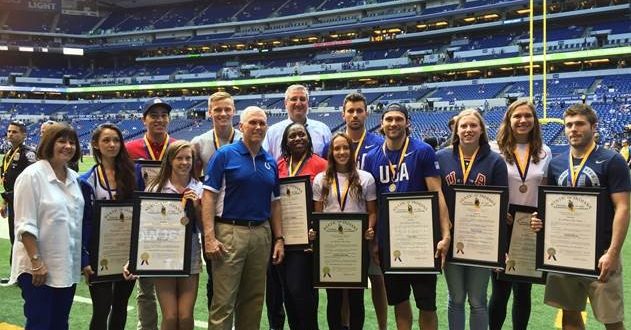 “We are so proud to have watched our Indiana Olympians compete on the world stage at the 2016 Olympic Games in Rio,” said Governor Pence. “Each of these athletes’ heroic feats speak to the American spirit; tales of perseverance, strength, sacrifice and triumph. But for all of their achievements, we are especially proud of the Hoosier-rooted hard work and compassion that shaped them along the way. We were grateful today to honor each of  them with a Sagamore of the Wabash to mark their historic contributions to our Hoosier heritage.”

The Governor, First Lady and Lieutenant Governor Eric Holcomb, along with the Indiana Olympians Association, Indiana Sports Corp and the Indianapolis Colts celebrated the Team USA members at a private reception before the Colts game at Lucas Oil Stadium. The First Lady, Indiana’s Bicentennial Ambassador, also honored each Olympian with an Indiana Bicentennial Commemorative Medal, a special memento to commemorate the state’s 200 years of history. 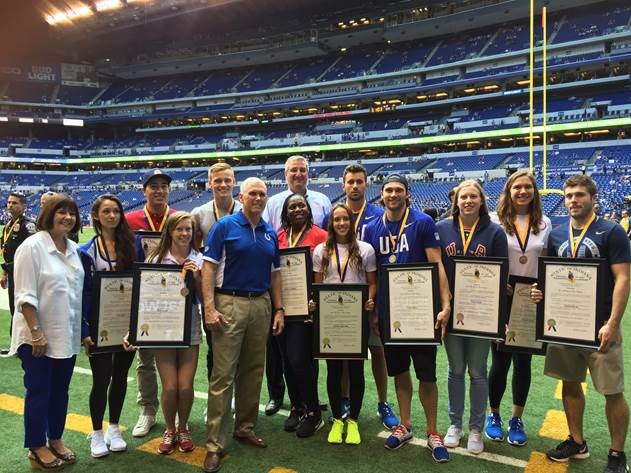 I play on the radio from 7 am -1 pm weekdays on 98.9 FM WYRZ and WYRZ.org. Follow me on twitter @WYRZBrianScott or e-mail me at brian@wyrz.org.
Previous Governor Pence, Lt. Governor Holcomb Ask VA Secretary to Reinstate GI Bill Benefits for ITT Technical Institute Student Veterans
Next JPMorgan Chase Foundation awards $100K to Indy Chamber’s Business Ownership Initiative to support entrepreneurship on Near West Side