The Will Koch Indiana Tourism Leadership Award is presented annually and is the highest tourism honor given by the State of Indiana. The award is named for the late Will Koch, long-time owner and president of Holiday World & Splashin’ Safari. IOTD and the Koch family established the honor to pay tribute to Will Koch’s many meaningful contributions to tourism, business and society.

“It was a true honor to present Mayor Hudnut with the Will Koch Indiana Tourism Leadership Award,” Ellspermann said. “Mayor Hudnut is such a special part of Indianapolis and is an extraordinary leader in tourism. Mayor Hudnut’s vision expanded the tourism industry throughout the entire state of Indiana. He is a true tourism innovator.”

Hudnut, who divides his time between Maryland and New York, was unable to travel to Indianapolis to attend the Hoosier Hospitality Awards presentation at the fairgrounds. Earlier this month, Lt. Governor Ellspermann and IOTD Executive Director Mark Newman visited Hudnut and his wife Beverly in upstate New York to present him with the 2015 Will Koch Indiana Tourism Leadership Award.

“It is a privilege and an honor to receive this award. I accept it on behalf of everyone who works hard to promote Indianapolis and Indiana as a center for conventions and a center for tourists,” Hudnut said. “A magnified tourism trade makes a big difference and Indianapolis is now known as a great convention city, which helps the entire state. I cherish this award; it is very thoughtful and I thank you so much.”

For over 30 years, Bill Hudnut committed himself to a life of public service, punctuated by 16 years as mayor of the City of Indianapolis from 1976 to 1992.  Because of his visionary leadership, an Indianapolis renaissance began that has yet to slow.

Under Hudnut’s leadership, the first-of-a-kind Indiana Sports Corporation was formed, sports venues were built and Indianapolis hosted the National Sports Festival and the Pan American Games. Additionally, Mayor Hudnut forever changed the future of the city when he coaxed the Colts to town. A new sense of civic pride emerged during the Hudnut era that resounds today. Sport was indeed the catalyst at the time and so much else has flourished because of it—small business, arts and culture and the Indiana Convention Center to name a few.

“We wanted to be a major league city because that would attract many more conventions and tourists. You don’t do it in a day, but over the years you put the pieces together and they all begin to fit into the jigsaw, and then you’ve got a city you can be proud of,” reflected Hudnut.

In much the same way that Will Koch’s legacy continues to impact Holiday World, Bill Hudnut’s legacy shone on an international stage recently when Indiana hosted the 2012 Super Bowl.

“If it weren’t for Bill Hudnut, the Colts wouldn’t be in Indianapolis. If not for the foresight and courage of Mayor Hudnut, Indianapolis would have never been prepared to host the Colts and many of the events that triggered the renaissance that we still see today,” said Pete Ward during the awards ceremony. Ward is chief operating officer of the Indianapolis Colts and one of the few remaining Colts employees who made the move to Indianapolis from Baltimore at Mayor Hudnut’s urging. “On behalf of the entire Colts organization, we congratulate Mayor Hudnut on this honor and thank him for all he’s done for Indiana.”

Nominations for the Will Koch Indiana Tourism Leadership Award are submitted by community leaders and members of Indiana’s travel, tourism and hospitality industry. Submissions are reviewed by an 8-member panel comprised of representatives from Purdue University, the Indiana State Fair, Holiday World & Splashin’ Safari, Grow INdiana Media Ventures, the Indiana Restaurant and Lodging Association and state tourism leaders. Winners are recognized for outstanding accomplishments in economic and community development through tourism.

A video about this year’s Will Koch Indiana Tourism Leadership Award, including footage of Mayor Hudnut accepting the honor, can be found here.

Lt. Governor Ellspermann and IOTD presented 20 representatives of the tourism industry the Hoosier Hospitality Award for their high level of service in tourism-related jobs at hotels, restaurants, attractions and other destinations.

“These professionals and their Hoosier Hospitality are the vibrant pulse that keeps the tourism industry alive and well in the state of Indiana. It is a great honor to present these awards to such deserving tourism leaders whose work all too often goes unrecognized, but never unappreciated. They live out the Hoosier ideals each and every day as they are out on the front lines showing the public what makes Indiana a great place to visit,” stated Ellspermann.

Nominations for Hoosier Hospitality Awards are submitted by community members and destination patrons. Nominations are reviewed and winners are selected by IOTD. Outstanding service is a major factor in determining whether a person returns to an individual business or destination.

“These award recipients are living examples of Hoosier Hospitality and what it means to dedicate oneself to the high level of service that Indiana is proud to consistently provide,” said Mark Newman, IOTD Executive Director.  “Their daily encounters with guests and visitors make what we do at the state level that much more effective.” 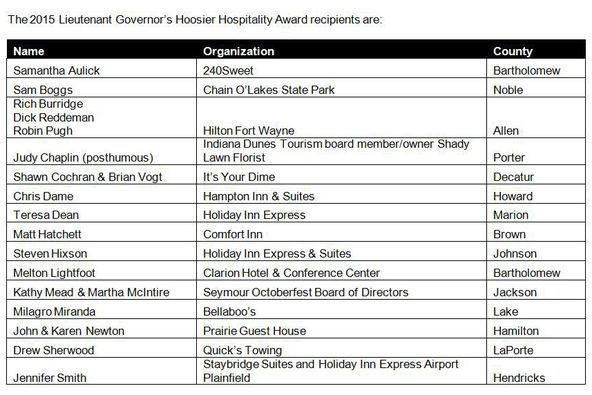 I play on the radio from 7 am -1 pm weekdays on 98.9 FM WYRZ and WYRZ.org. Follow me on twitter @WYRZBrianScott or e-mail me at brian@wyrz.org.
Previous Autism Society of Indiana to Participate in Big Give for Autism – Fundraiser Sept. 17th
Next Governor Pence Names Carol Comer Indiana Department of Environmental Management Commissioner