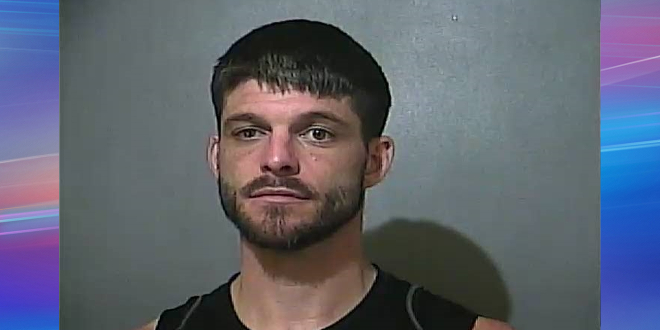 Vigo County, Terre Haute – Wednesday, August 7, 2019, at approximately 12:30 a.m., Indiana State Trooper Brad Fyfe observed a vehicle traveling northbound on Lafayette Avenue near Carl Avenue with no operating tail lights.  The vehicle was a white Jeep with an Indiana registration.  Trooper Fyfe activated his emergency lights to initiate a traffic stop.  The Jeep promptly pulled over,  and came to a stop.

Trooper Fyfe proceeded to speak to the three occupants in the Jeep.  During his conversation, Trooper Fyfe immediately detected suspicious activity coming from a male passenger in the rear seat of the Jeep. Trooper Fyfe asked him for his identification, but the male passenger was unable to produce a picture ID, becoming visibly nervous, having difficulty even verbalizing his name.  Trooper Fyfe advised all occupants to stay in the vehicle and returned to his patrol car to verify the information that was provided to him.  Trooper Fyfe then observed the male passenger, from the rear seat, quickly exit the vehicle, running west. Trooper Fyfe, without hesitation, got out of his patrol car and gave loud verbal commands for the male subject to stop, but the commands were disregarded and Trooper Fyfe pursued on foot.  The fleeing male subject attempted to cross Lee Avenue and Lafayette Street, between two buildings, when Troopers Rondell Shelton and David Petrowski arrived on the scene and demanded the male subject to get on the ground.  The male subject stopped running and immediately complied with the verbal commands of the troopers.

The troopers immediately secured the male subject and placed him into a patrol car.  The male subject was then identified as Curtis S. Freeland, 34, of Terre Haute, Indiana.  During a search of a backpack that Freeland had left in the Jeep, it was discovered that it contained methamphetamine and a hypodermic syringe.  It was also discovered, during the course of the investigation, that Freeland was wanted out of Shelby County for auto theft and criminal recklessness with a deadly weapon.  Freeland was taken into custody and was transported to the Vigo County Jail where he is currently being detained.

Anyone with illegal drug information is encouraged to contact the Indiana State Police Putnamville Post at 1-800-742-0717.  Your tip can remain anonymous and could save a life.

I play on the radio from 7 am -1 pm weekdays on 98.9 FM WYRZ and WYRZ.org. Follow me on twitter @WYRZBrianScott or e-mail me at brian@wyrz.org.
Previous Celebrate Farmers Market Week at the Brownsburg Farmers Market
Next Hillsdale Man Arrested for Child Exploitation