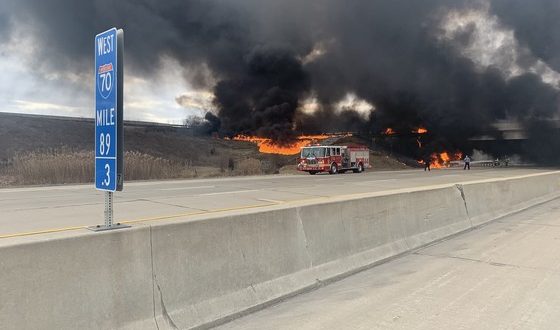 Indianapolis, IN – Just before 2:00 p.m. Tuesday, emergency crews were called to the scene of a semi tractor-trailer crash on the ramp from I-465 southbound to I-70 eastbound on the east side of Indianapolis. 911 calls were indicating the semi overturned and there was a large fire. Trooper Chris Hanson was the first on the scene and assisted three other Good Samaritans with treating the driver’s injuries until medics arrived. Preliminary information is three people stopped when they saw the wreckage and helped the driver escape the flames. The driver was transported to an area hospital in critical condition.

Preliminary investigation revealed the semi tractor-trailer was exiting from I-465 onto I-70 when it overturned on the curve of the ramp. Investigators believe unsafe speed contributed to the roll-over. The driver was identified as 59 year old Jeffrey Denman of Brownsburg Indiana.

I play on the radio from 7 am -1 pm weekdays on 98.9 FM WYRZ and WYRZ.org. Follow me on twitter @WYRZBrianScott or e-mail me at brian@wyrz.org.
Previous Indiana DNR Division of Law Enforcement now hiring new officers
Next Filing Your Taxes Confusing? Help is Available!