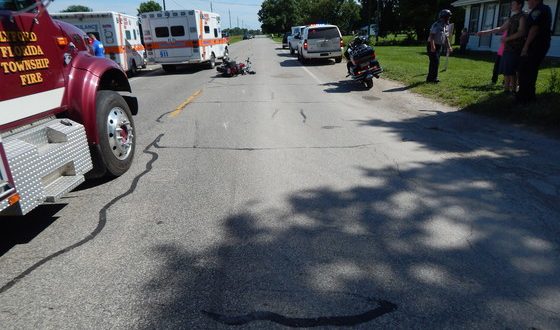 Parke County – June 25, 2019, at approximately 4:20 p.m., Indiana State Police responded to an accident at US 41 and Vila Rosa Road, which injured one individual.

Preliminary investigation by Trooper Michael Organ revealed Carolyn S. Tupes, 73, of Rosedale, Indiana, was driving a 1994 Dodge pickup, when she attempted to turn south onto US 41 from Vila Rosa Road and failed to observe a 2009 Honda motorcycle traveling southbound on US 41. The motorcycle was driven by William J. Trimble, 69, of Clinton, Indiana.  Trimble attempted an evasive driving maneuver, but was unable to avoid the collision. Trimble was thrown from his motorcycle and although his injuries were non-life-threatening, he was transported by air ambulance to Indianapolis.

I play on the radio from 7 am -1 pm weekdays on 98.9 FM WYRZ and WYRZ.org. Follow me on twitter @WYRZBrianScott or e-mail me at brian@wyrz.org.
Previous State Road 39 Bridge in Boone County over Sugar Creek will close July 8
Next IDOC Helps ISP with Storm Damage Clean up at Indianapolis Post