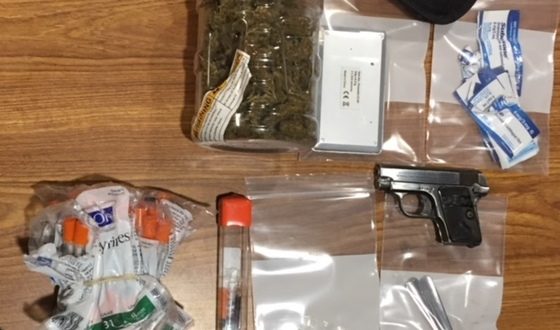 Vigo County—On Tuesday March 20 at approximately 8:55, Indiana State Police troopers were dispatched to the Interstate 70 Welcome Center near the one mile marker, for a report of a suspicious male in the rest room acting erratically.

Upon arrival, officers located the male outside near the vending machines and identified him as 28-year-old Bryan P. Moreno of Trinidad, Ohio. Further investigation revealed multiple used syringes in the bathroom stall previously occupied by Moreno, and inside Moreno’s white Chevrolet, troopers located approximately 84 grams of suspected Marijuana, approximately ½ gram of Methamphetamine, approximately ½ gram of Heroin, 13 packages of Suboxone, and a .25 caliber Colt semi-auto pistol, assorted items of drug paraphernalia.

The case was investigated by ISP Trooper Brad Fyfe. Assisting were Troopers Nicole Cheeks and Ian Portteus with his K-9 “Czar”, the Vigo County Sheriff’s Office and the West Terre Haute Police Department.

I play on the radio from 7 am -1 pm weekdays on 98.9 FM WYRZ and WYRZ.org. Follow me on twitter @WYRZBrianScott or e-mail me at brian@wyrz.org.
Previous Companion to Donnelly’s ‘Right to Try’ Legislation Passes U.S. House
Next Hoosiers Feeding the Hungry is funded in part by a grant from Honda Manufacturing of Indiana