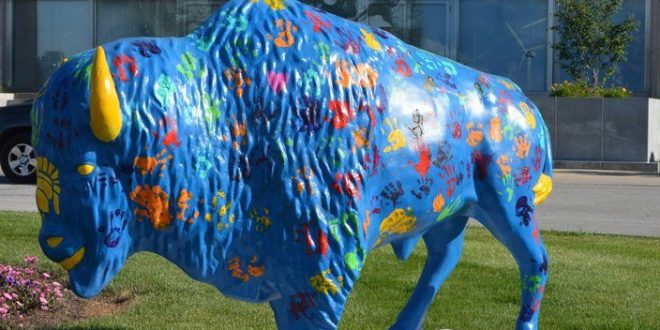 Duke Energy displays a 200-pound fiberglass bison on US 40.

You may notice a 200-pound fiberglass bison on US 40 outside of Duke Energy.

In celebration of  Indiana’s 200th birthday, the Duke Energy Foundation arranged for St. Susanna School to participate in a public art project with the Indiana Bicentennial Commission. St. Susanna students painted and decorated the bison. 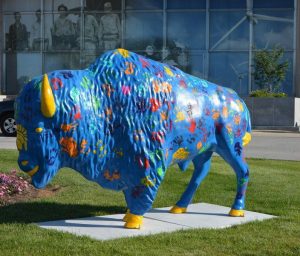 The commission launched a statewide public art effort where artists, students and other Hoosiers decorated the 5-foot tall by 8-foot long fiberglass bison. The legacy project aimed to engage Hoosiers in Indiana’s bicentennial and to have colorful bison displayed in each of Indiana’s 92 counties. Duke Energy shipped bison to Attica, Batesville, Greencastle, Hanover and Terre Haute as well as Plainfield.

“This was fun, Indiana history to commemorate our state’s bicentennial year, and the bison will be enjoyed for many years to come,” said Steve Bahr, Duke Energy community relations manager for Hendricks County.

The bison, or American buffalo as it is often called, is prominently displayed on Indiana’s state seal. The sun rising on the seal shows that Indiana has a bright future. The woodman represents civilization subduing the Indiana wilderness.  The fleeing bison represents the wilderness fleeing westward from advancing civilization.