Driver Pulls into Path of Sheriff’s Vehicle in Sullivan County 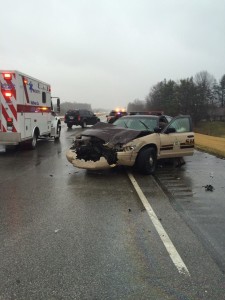 Sullivan County—This morning at 9:45, Indiana State Police and Sullivan County emergency agencies responded to a two-vehicle in the northbound lanes of US 41 at West Washington Street. The crash involved a Warrick County (Indiana) Sheriff’s deputy and another motorist with only minor injuries.

Preliminary investigation revealed a silver 2014 Chevrolet pickup, driven by 68-year-old Anthony Boles of Sullivan, IN., was southbound on US 41 and made a left turn into the median at Washington Street. Boles then attempted to proceed east on Washington Street across the northbound lanes of US 41. In doing so, Boles pulled into the path of a northbound 2009 Ford Crown Victoria, driven by 28-year-old Jared West of Newburgh, IN. The Crown Victoria then struck the Chevrolet pickup on the right rear passenger side.

Anthony Boles was not injured, but was cited for failure to yield the right of way.

Jared West is a deputy sheriff for the Warrick County Sheriff’s Office and was operating a fully marked patrol vehicle transporting a 17-year-old juvenile detainee. West was not injured, but the juvenile was transported to Sullivan County Community Hospital for treatment of back and neck pain. Sullivan County Sheriff Clark Cottom provided an officer for security of the prisoner at the hospital to assist the WCSO.

A passenger in the Boles vehicle, 26-year-old Lucas Vilchuck, was transported to Terre Haute Regional Hospital for treatment of neck and back pain.

I play on the radio from 7 am -1 pm weekdays on 98.9 FM WYRZ and WYRZ.org. Follow me on twitter @WYRZBrianScott or e-mail me at brian@wyrz.org.
Previous Donnelly Meets with Hoosier Families Trying to Bring Adopted Congolese Children Home to U.S.
Next Governor Pence Announces Creation of Governor’s Health Workforce Council