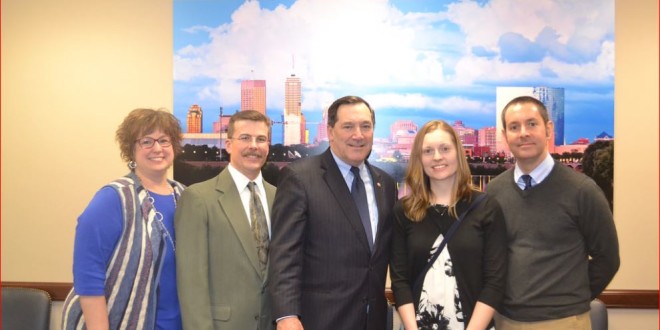 Washington, D.C. – U.S. Senator Joe Donnelly met with Hoosier families who have adopted children from the Democratic Republic of Congo (DRC) but have not yet been able to bring their children to the United States. Earlier this month, Donnelly and the rest of the Indiana Congressional delegation wrote to President Obama asking him to directly intervene with DRC President Kabila to help alleviate the delays. On February 19th, the DRC agreed to allow over 150 adopted children to come to the United States, though there are as many as 300 other children who have been adopted and are still awaiting exit permits to join their American families.

Donnelly said, “While some families are receiving the good news that they will soon be united with their children, many families are still waiting for answers and updates. The children have legally completed adoptions, and are just a plane flight away from being able to join their loving families in Indiana. These parents and their children stuck in the DRC deserve our best efforts to unite them in loving homes, and we are continuing to work with these Hoosier families.”

I play on the radio from 7 am -1 pm weekdays on 98.9 FM WYRZ and WYRZ.org. Follow me on twitter @WYRZBrianScott or e-mail me at brian@wyrz.org.
Previous Attorney General Candidate Curtis Hill Announces Opposition to President Obama’s Plan to Relocate Guantanamo Bay Detainees
Next Driver Pulls into Path of Sheriff’s Vehicle in Sullivan County