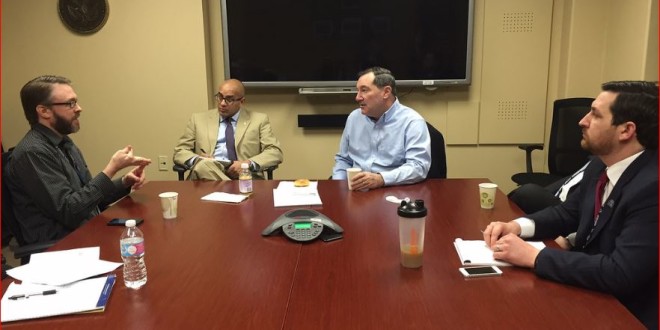 Indianapolis, Ind. — Today, U.S. Senator Joe Donnelly met with leadership of the Richard Roudebush Department of Veterans Affairs (VA) Medical Center in Indianapolis to discuss mental health and suicide prevention services for veterans, including the Veterans Crisis Line (VCL) run out of a VA office in Canandaigua, NY. The crisis line is a suicide prevention hotline for veterans and servicemembers and their families. A recent investigation by the VA’s Inspector General revealed that some veterans routed to backup call centers contracted by the VA to handle overflow traffic faced long wait times or were directed to a voicemail.

Donnelly said, “It is unacceptable that a veteran in crisis would get directed to voicemail. I had a productive meeting with officials at the Indy VA this morning to get more information about this troubling situation and to hear what the VA is doing to ensure this doesn’t happen in the future.

“Every caller to this crisis hotline must be immediately connected with a trained, qualified responder – and we need to make sure the VA has the resources and quality management necessary to meet that requirement. I am concerned about the pattern we are seeing with companies under VA contracts. In this case, as with the Veterans Choice Program, contractors are not meeting the standards our veterans deserve. The VA needs to do a better job of holding those contractors accountable.”

Donnelly has been active in making improvements to the Veterans Choice Program, including on a provision that allows veterans to access non-VA providers if they live more than 40 miles from a VA health facility or face “an unusual or excessive burden” in accessing VA care. In late 2014 and again in early 2015, Donnelly and U.S. Representative Pete Visclosky (IN-01) sent the VA two letters requesting the VA consider travel times and the distance from appropriate care, rather than simply the straight-line distance from a veteran’s home to the nearest VA facility.

The “Care Package” builds on the progress made by Donnelly’s Jacob Sexton Military Suicide Prevention Act, which was signed into law late in 2014 and for the first time requires an annual mental health assessment for all servicemembers—Active, Guard, and Reserve.

I play on the radio from 7 am -1 pm weekdays on 98.9 FM WYRZ and WYRZ.org. Follow me on twitter @WYRZBrianScott or e-mail me at brian@wyrz.org.
Previous ISP Trooper Promoted to Indianapolis Public Information Sergeant
Next Indy Chamber Announces Export Assistance Grant Program Supported by JPMorgan Chase & Co.