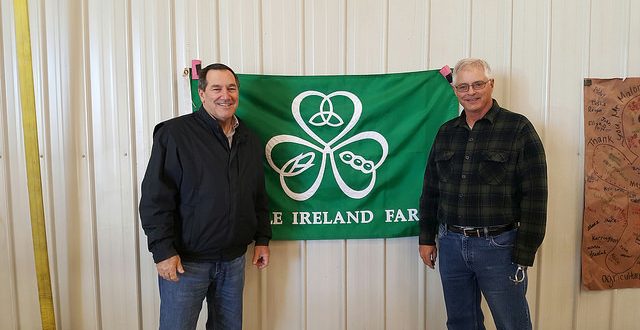 Brownsburg, Ind. – U.S. Senator Joe Donnelly was awarded the Indiana Farm Bureau ‘Friend of Farm Bureau’ award today in recognition of his work and support for policies that benefit Hoosier farmers. After receiving the award at Little Ireland Farm in Brownsburg, Donnelly reviewed soil health and conservation efforts at the farm, including a demonstration on how to improve soil structure.

Donnelly said, “No one knows more about agriculture than our farmers and their families, who live and work on the land every day. One of my top priorities is making sure our farmers have the opportunity to prosper. I am honored to receive the ‘Friend of Farm Bureau’ award and will continue to visit Hoosier farms, listen to farmers’ ideas and concerns, and support policies that ensure our agriculture community can provide the food and fuel needed to power our country.”

Katrina Hall, Indiana Farm Bureau Public Policy Director, said, “Senator Donnelly has proven to be one of the most accessible elected officials Indiana Farm Bureau members have ever experienced. He is willing to literally get his hands dirty with farmers to understand what they face. Joe Donnelly’s tireless efforts in D.C. were integral to the development and passage of the biotechnology labelling bill. He has also been a strong advocate for Hoosier farmers on energy and environmental issues, most notably the Renewable Fuel Standard and the EPA’s Waters of the U.S. rule. It is a blessing for Farm Bureau to have such a highly respected leader on Capitol Hill who is capable of moving the needle on policies that support Indiana’s producers of food, fuel and fiber. We are proud to present him with the Friend of Farm Bureau award.”

Donnelly, who serves on the Senate Agriculture Committee, helped negotiate the bipartisan biotechnology labeling legislation that was signed into law in July 2016, worked to improve the EPA’s Waters of the United States (WOTUS) rule, and is a strong supporter of biofuels and the Renewable Fuel Standard. He has visited more than a dozen farms since he began serving in the Senate in 2013. In addition to visiting farms across Indiana, he has held “Donnelly Days” to work alongside the agribusiness and agriculture community, including at Apache Sprayers in Mooresville and at Indiana Farm Bureau President Randy Kron’s Farm in Evansville.

I play on the radio from 7 am -1 pm weekdays on 98.9 FM WYRZ and WYRZ.org. Follow me on twitter @WYRZBrianScott or e-mail me at brian@wyrz.org.
Previous Indiana Employment Up 10,000 Hoosier Jobs in September
Next State announces dates for the 2016-17 Winter Assistance Program